The adrenal cortex is red to light brown in colour and is composed of three zones. From the outer to inner, the layers are;

All these zones produce hormones derived from cholesterol, which is abundant in the cells. The adrenal cortex represents 80-90% of the adrenal gland. 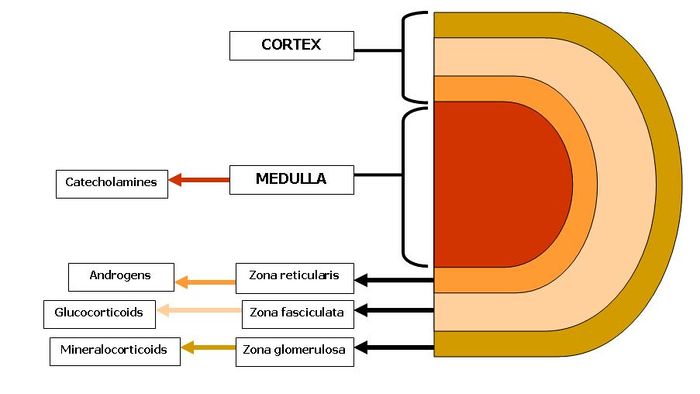 The adrenal glands develop from two separate embryological tissues; the neural crest ectoderm and the intermediate mesoderm. The medulla originates from neural crest cells migrating from sympathetic ganglion. Mesodermal cells then surround the medulla. The adrenal cortex develops from the intermediate mesoderm. The fetal cortex develops in the centre, with the permanent cortex surrounding it. By 4 months of age the adrenal gland is fully developed.

Even though the adrenal glands gain their name through their relationship with the kidney, they are in fact more closely related to the major vessels, including the aorta and the caudal vena cava.

The adrenal glands are elongated and are often asymmetrical, being moulded around the neighbouring vessels. Their size varies greatly and generally those of juveniles are larger than adults, and those of lactating or pregnant animals are larger than reproductively inactive animals. A medium-sized dog's adrenals will on average measure 2.5 x 1 x 0.5cm. The adrenal glands are firm, and their capsule is easily fractured on flexion. The cortex on appearance is yellow and radially striated, whilst the medulla is darker with a more uniform appearance. The zona glomerulosa is narrow and the cells are in a whorled pattern. The zona fasiculata is wide and the cells lie in columns and the zona reticularis is more randomly organised.

The oxygenated supply is from various branches of the following neighbouring trunks; aorta, renal artery, lumbar artery, phrenicoabdominal artery and the cranial mesenteric arteries. After perfusion of the gland, the blood pools in a central vein and then exits the gland through the hilus. This then joins up with the caudal vena cava or one of its tributaries.

The function of the cortex is to produce adrenocorticoid hormones. The three zones each make a specific type of hormone:

The hormones are formed from the esterified cholesterol that is stored in intracellular lipid droplets. Below is the steps of how the adrenocorticoid hormones are made from cholesterol.

1) The P450scc enzyme converts cholesterol to pregnenolone by the removal of a side chain. This is regulated by ACTH and is the rate determining step of adrenocorticoid hormone production. This occurs in the mitochondria.

2) Hydroxylation reactions occur in the mitochondria and endoplasmic reticulum converting pregnenolone into specific hormones. The location within the cortex determines the hormones produced.

These hormones regulate the metabolism of inorganic ions, such as sodium, potassium and chloride. Several hormones are produced but the most important is aldosterone. Aldosterone is formed in the zona glomerulosa by the conversion of pregnenolone to cortisol and then to corticosterone, before finally becoming aldosterone. It circulates by binding to albumin and cortisol-binding globulin. It's plasma half-life is 20 minutes. It is eventually inactivated in the liver, where it binds to glucuronic acid and is excreted in bile and urine.

It's main regulators of synthesis and secretion are; Renin and extracellular concentrations of potassium ions. Its main action is upon renal regulation and electrolyte and fluid balance. These are fully explained within the renin-angiotensin and aldosterone system pages.

These hormones are important in regulating glucose metabolism; the most important of them is cortisol. This is formed within the zona fasciculata by the conversion of pregnenolone directly to cortisol. It is transported by cortisol-binding globulin and has a half-life of 90 minutes.

Regulation of Synthesis and Secretion

This is regulated by the hypothalamus-pituitary adrenal axis as follows: 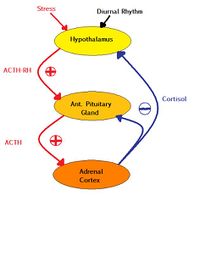 An environmental, or internal stimuli (such as stress or light regulating the circadian rhythm) causes the hypothalamus to release ACTH-releasing hormone (ACTH-RH). ACTH-RH flows to the pituitary gland, stimulating the production of adrenocorticotrophic hormone (ACTH). ACTH binds to receptors on the cells of the adrenal cortex, thus activating adenyl cyclase. This leads to increased cAMP levels, and the mobilization of more cholesterol and so the production of more cortisol. This is the rate limiting step and is determined by the P-450-enzyme. Cortisol then has a negative feedback effect on ACTH-RH and ACTH secretion.

These are essential hormones and have multiple effects around the body. Cortisol has a permissive action, i.e. without cortisol certain chemical reactions within cells are unable to occur, for example the production of epinephrine and glucagon. Cortisol is a stress hormone, in times of stress it is released and enhances the effect of norepinephrine on blood pressure. It is also essential for the day to day maintenance of normal blood pressure and will also stimulate gluconeogenesis and inhibit certain tissues utilization of glucose. Cortisol stimulates the degradation of fats and proteins and inhibits DNA synthesis in some tissues. This along with degradation of protein, results in a growth-inhibiting effect in times of stress. It can also have anti-inflammatory effects. It inhibits the formation of prostaglandins and cytokines and reduces the ability of white blood cells being transported to an injured area. It helps keep in check inflammatory processes that could potentially cause tissue damage. Cortisol is also immunosuppressive, by reducing the lymphocyte numbers in circulation and reducing antibody production.

These hormones function as male sex hormones. The most important of these is testosterone. This is produced by the conversion of pregnenolone to dehydroepiandrosterone, then to androstenedione and finally to testosterone. This occurs in the zona reticularis. They bind in the blood to sex hormone-binding globulin (SHBG) and albumin. Most adrenal androgens have little physiological action until they are converted to testosterone. They have little importance within the male, however, in women adrenal androgens, which are converted to oestrogen in adipose tissue, is the most important source of oestrogen after the menopause.

Tyrosine is firstly converted to dihydroxyphenylalanine by tyrosine hydroxylase. This is the rate-limiting step. Dihydroxyphenylalanine is then converted into dopamine, then into norepinephrine and finally into epinephrine. They are stored in secretory vesicles and are released by exocytosis. They are metabolised in the liver and kidney and their half-lives are only 1-3 minutes. Some unmetabolised catecholamines are excreted in the urine.

Regulation of synthesis and secretion

They are released in response to stress by the firing of preganglionic sympathetic nerve fibres in the adrenal medulla. This causes release of acetylcholine, thus depolarizing the cell membrane. An action potential is generated and an influx of calcium ions results in the exocytosis of the catecholamine vesicles.

The catecholamines bind to two types of receptor proteins in cell membranes to elicit a response; these are alpha and beta receptors. The following is a table of where the receptors are located in the body and their effects when stimulated.

The adrenal glands are essential to life. They are closely applied to the cranial poles of each kidney. Consists of a cortex and medulla, each having different embryological origin. In some lower animals the two components actually exist as separate endcrine glands.

As with any endocrine gland there are two main types of pathology: