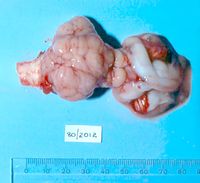 Failure of cerebral hemispheres to form in a bovine foetus due to Akabane infection. Copyright CFSPH Iowa State

Akabane Virus is a member of the bunyavirus family, the largest of all the viral families and thus is related to many other diseases including Rift Valley Fever and Nairobi sheep disease.

Akabane is a teratogenic disease, infecting foetuses of cattle, sheep and goats in-utero.

Tropical and temperate regions, particularly Africa where it is thought to be present throughout the continent. Seroconversion in Kenya may be as high as 95% in animals of breeding age. In areas where infection prevalence is extremely high, no pathologic effects are seen.

Akabane virus is transmitted by insect vectors, mainly Culicoides midges but also mosquitoes of the Aedes spp. and Culex spp. and some species of tick. Mosquitoes appear to be solely mechanical vectors as no viral replication occurs within them.

Many wild ruminant and equid species have been demonstrated to have antibodies to Akabane virus. Clinical signs though, are only seen in cattle, sheep and goats, but other species may act as amplifying hosts for viral replication.

Arthrogryposis, or joint contracture, ankylosis (inability to straighten the joints), hydrancephaly and less commonly, polioencephalomyelitis are among the congenital signs seen in offspring of infected dams due to the teratogenic effects of Akabane. If the jaw is also malformed (brachygnathia/prognathia) then dysphagia will result. Other congenital lesions seen include cleft palate, lordosis and kyphosis.

Neurological effects of the disease manifest somewhat non-specifically as ataxia, recumbency, trembling, opisthotonous, dysmetria, hypermetria, nystagmus and blindness. However, a combination of musculoskeletal deformities and neurological deficits is the trademark of Akabane.

Akabane can also result in abortion or births of stillborns if foetal damage is too severe. Infertility and agalactia may also be seen in infected females but this is uncommon.

The pathogenesis depends on the timing of infection; the critical periods are 76-249 days in the cow and 30-53 days in the ewe.

The sudden onset of large numbers of abortions and clinical signs in neonatal stock as discussed above is highly suggestive of AKA.

Viral isolation can be attempted from placental caruncles and foetal fluid, membranes or nervous tissue. It can also be performed from serum/plasma of dams during peak vector activity periods. Virus can be innoculated into cell cultures and identified by Immunofluorescence (IF). PCR is also available.

Serologically, many tests are possible but ELISA predominates.

Antibodies to AKA may persist for up to 2 years after infection and often do not indicate clinical disease so are of little clinical use.

The foetus and placenta from animals infected with Akabane demonstrate subcutaneous petechiation and ecchymotic bleeding. White, turbid spots are apparent on the amnion. Erosions are common between the nares and digits of the foetus. A fibrinous polyarticular synovitis is often accompanied by navel infection, synovitis and other congenital lesions. The limbs are usually locked in position. CNS lesions will be present in the spinal cord, cerebellum and motor spinal nerves.

No treatment is available

The mainstay is vaccination. Protection should be at a maximum during late spring and early summer when vectors are at peak activity. Inactivated and live forms are available.

Vector control and protection/avoidance of animals from vectors are valuable but often impossible due to difficulties identifying vector breeding sites.