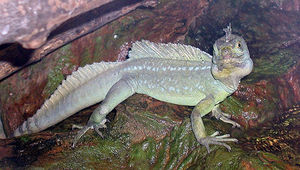 The most common basilisks are the plumed, common and brown.

Basilisks are tropical American iguanids. The males of these species grow to lengths of up to 90 cm, most of which is tail. Upon maturity, raised dorsal and caudal fins appear. Males tend to be highly territorial and keeping multiple males in small enclosures is inadvisable. Fighting will always occur if males are kept together and results in dominance over weaker males, which will not thrive under such stress. Males tend to exhibit head bobbing as both a threat gesture and a courtship behaviour to attract potential mates. Female basilisks are smaller comparatively and lack the ornamental fins of their male counterparts.

These lizards are terrestrial, somewhat arboreal and prefer locations near water. Having specialized scales on the bottoms of the rear feet, basilisks are able to run across the surface of water for some distance before breaking the surface tension and swimming away hurriedly. They have been thus dubbed the "Jesus lizard" in parts of their native countries. In captivity, these lizards tend to maintain their somewhat skittish nature and do not make the best pets for those who wish to handle their pets frequently.

Both sexes are bright green or blue/green, scattered with white and blue spots. Males tend to be larger than females and reach up to 70 cm; they have spectacular dorsal and caudal crests and a double crest atop the head (the anterior one being smaller). The eye is bright yellow to orange. Young are brightly coloured, have no dorsal crest and are about 12-15 cm in length. Although spectacular when adult, green basilisks are difficult to keep and the least recommended for the amateur reptile keeper.

The common basilisk grows to 80 cm. A tan brown body and two cream coloured lateral stripes distinguish it. The head crest is pronounced, single and with a posterior outgrowth.

Similar in size and shape to B. basiliscus. It differs in having keeled ventral scales, a more pointed head crest and a single lateral stripe on each flank (the dark dorsal bands of B.vittatus are broader compared to those of B.basiliscus).

It is important to nutrient load the insects for 72 hours before being offered as prey.

Basilisks generally do well in captivity (lifespan about 6 years) provided their minimum requirements are met in terms of cage size and design. They can be kept in standard glass aquariums with locked screen covers. The tank size corresponds to the number of animals one wishes to maintain. For instance three females and one male can be housed in a 250 litre aquarium.

Large, sturdy branches for climbing should be included. Potted plants such as pothos, dracaena or philodendron can also be added to enhance the enclosure and add to the lizards' sense of security. Basilisks should be provided with a pool or large water bowl.

Basilisks enjoy a basking site, and regulate their body temperatures by moving back and forth between heat sources and shaded areas. Therefore, the keeper should provide open exposure to heat as well as to shaded areas to aid in thermoregulation. A ceramic heating element suspended above the cage does not emit light but is a good source of heat.

As with most captive reptiles, full-spectrum lighting is necessary for the synthesis of vitamin D3 and utilisation of calcium. Exposure to natural sunlight is more beneficial.

Relative humidity requirements vary among species and depend on the keeper's goal. Humidity at about 60-70% is acceptable. This can be accomplished by a daily misting, or setting up a system with a timer to mist several times per day. The common basilisk requires a relative humidity upwards of 80% to induce breeding.

Coming from the tropical zones of the Americas, basilisks need a temperature range of 28-31ºC during the day, dropping to a minimum of 23ºC at night.

Successful breeding results from several factors: manipulation of humidity, temperature and photoperiod, health of specimens to be bred and careful incubation of eggs. For the common basilisk high relative humidity is necessary. Temperatures around 29-32ºC are optimal. A photoperiod of 12 hours light to12 hours dark seems to be the best ratio. These guidelines can also be used for the plumed and the brown basilisk; however, in the latter a lower relative humidity will also be effective in inducing breeding behaviour.

Clutch sizes vary between the species: the common basilisk produces 8-18 eggs (averaging 12); the brown up to 12 (averaging 5-7 eggs); the plumed 15-17 eggs. These lizards are known for their ability to lay multiple clutches per season, sometimes up to four or five. In general, the clutch depends on the age, size and health of the female.

Eggs should be removed and marked on their tops with a pencil in order to preserve their original orientation. The eggs are then transferred to a circulated air incubator and placed in a mixture of water and vermiculite (1:1 by weight). Eggs should be placed about two-thirds down, with their tops slightly visible. A thin layer of damp sphagnum moss may be placed on top to increase humidity. Incubation temperatures should be maintained at around 29ºC with a high relative humidity, especially during the first four weeks.

Hatching occurs at around eight to ten weeks and occurs over one to two days. Hatchlings emerge from the leathery eggs by way of their egg tooth, which later drops off. Young basilisks should be left in the incubator until the yolk sac is absorbed. After this, they can be placed in a separate tank, which is set up, similar to their parent's enclosure, and reared on small one- to two-week-old crickets and wax worms.

They reach sexual maturity within 18-24 months. However, fighting among males may be observed as early as five months and males should be separated at this time. Hatchlings have high calcium requirements.