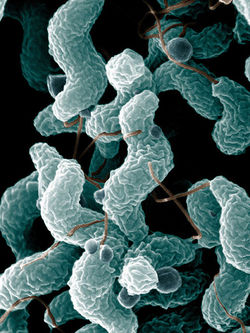 Campylobacter live on the mucosa of the intestinal and genital tract and can be commensals or pathogens. The enteric species cause disease in humans and other species cause infertility and abortion in cattle and sheep. Campylobacteriosis is caused by Campylobacter organisms. C.jejuni and C. lari is excreted in the faeces of birds and pigs and can contaminate water and food supplies. C.fetus is restricted to the bovine prepucial mucosa. Captive reptiles may be the reservoir in cases of human infection.

The bacteria are curved, Gram negative rods with polar flagellum to aid motility. The daughter cells remain joined, giving a gull-wing or spiral appearance. They are microaerophilic and sensitive to drying. Campylobater species can be divided into; Thermophilic species, including C.jejuni and C. coli and Non-thermophilic species e.g. C.fetus. They can grow on enriched selective media e.g. Skirrow agar in 1-10% carbon dioxide and 5-10% oxygen tension. Many grow on MacConkey, however C.jejuni requires increased temperatures for growth.

Smears are stained with dilute carbol fuschin for 4 minutes.

See Campylobacteriosis in dogs and cats and cattle.