Open (surgical) or closed (non-surgical). The use of technique depends on the operator’s preference, tooth morphology and type of disease present. The choice of technique used may depend on a pre-operative radiograph which is always recommended prior to an extraction.

This technique is used for all single rooted teeth or teeth that have been sectioned into individual roots.

The gingival attachment is cut around the whole circumference of the tooth using a no.11 scalpel blade or a sharp luxator. Either a luxator or elevator of appropriate size is then inserted into the periodontal ligament space to cut the periodontal ligament fibres. Once some space is created between the tooth and the bone, an elevator is used to work circumferentially around the tooth applying some apical and rotational pressure at an acute angle to the tooth root. Pressure should be applied for 10 seconds at a time to break down the periodontal ligament fibres. It is important that the tooth is not levered. Once the tooth is mobile it can be delivered from the socket using either fingers or extraction forceps. It is important to use extraction forceps correctly to avoid root fracture. The forceps should be applied as low down the root as possible. The forceps are initially used in a rotational manner to break down any remaining fibres and when the tooth is able to rotate in both directions, the tooth can gently be pulled from the socket.

To section teeth into individual roots a tapered fissure friction grip bur on a high speed handpiece with water-cooling should be used. A small diameter bur should be used. The furcation needs to be identified and as a general rule, lies below the main cusp of the crown. Once the furcation is identified the tooth should be sectioned from the furcation towards the cusp, from the buccal to lingual/palatal aspect of the tooth. Care should be taken not to damage the gingival attachment at the furcation. To check that the tooth has been adequately sectioned, place an elevator between the two sections of the tooth and gently rotate – both parts of the crown should move independently. 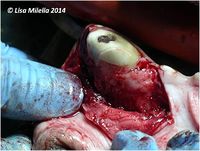 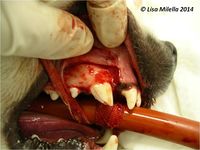 A surgical or open technique is an extraction technique involving raising a flap of tissue to remove bone that forms part of the socket, to allow access to the root and facilitate its extraction.

This technique should always be used for extraction of canine teeth, but the same principles can be applied to extraction of any tooth in the mouth. A surgical extraction technique is also used for retrieval of root remnants and if any abnormal tooth morphology exists. It may also be the surgeon’s preference to use a surgical technique if multiple adjacent teeth need to be extracted.

All oral surgery principles should be strictly adhered to when performing surgical extractions:

Size 5-0 and 4-0 poliglecaprone (Monocryl) is currently the most compatible suture material for intraoral use. It has rapid absorption times that approximate the optimum time for removal of non-absorbable suture materials and good tensile strength, knot security, smoothness and minimal tissue reactivity. Monocryl loses 20 to 30% of its original tensile strength after 2 weeks, and is completely absorbed by hydrolysis in 90 days.

Needles for use in oromaxillofacial surgery are of the swaged-on variety which reduce tissue trauma. The reverse-cutting needle which has a flat surface along its inner curvature prevents the inadvertent cutting of tissue and is the most commonly used needle in oromaxillofacial surgery. Tapered point needles are round in cross-section, and result in less tissue damage than cutting point needles, but are poorly suited for use in tough tissues, such as gingiva. Tapercut needles combine the cutting action of the reverse-cutting needle at its tip and the round body of the taper for atraumatic passage through delicate tissues. The tapercut needle is recommended for use in mucogingival surgery.

Types of Gingival and Mucogingival Flaps

An envelope flap is a gingival flap (i.e. does not extend apical to the mucogingival junction) created by making a sulcular incision and elevating some of the attached gingiva on the lingual and buccal aspects with no vertical releasing incisions.

An extended envelope flap is useful for extraction of several adjacent teeth.

Two types of mucogingival flaps (i.e. incisions extend apical to the mucogingival junction) can be used. Flaps used for extraction procedures are full-thickness flaps that also include the periosteum.

Technique for Surgical Extraction of an Upper Canine

Applying the Principles to the Lower Canine Tooth

The basic principles described above are used for the mandibular canine with the following exceptions:

Care should be taken when placing the vertical releasing incisions and raising the flap to avoid damaging the inferior alveolar blood vessels and nerve exiting the middle mental foramen. A longer releasing incision can be made rostrally creating more of a triangular flap.
Dental elevators should not be placed directly mesially and distally but rather on the mesiolingual and distolingual aspects of the tooth. This is to avoid fracture of the rostral mandible.

Indications for extraction of deciduous teeth may be due to malocclusion in puppies or because of persistent deciduous teeth. In a puppy less than 16 weeks of age, the permanent crown is only just developing and calcifying and immense damage can be done to this developing tooth if the luxator/elevator is positioned too far down the root or in the incorrect place. The length of the root of the deciduous tooth is usually about 2-3 times the length of the crown so a surgical extraction technique is used if the root is not resorbing.

A dental radiograph should be taken to assess where the permanent tooth bud is positioned or in the case of persistent deciduous teeth, whether the root is being resorbed or not. With resorption, there is loss of the density of the dentine and periapical resorption. In the cases where the root is being resorbed, a simple, non-surgical extraction technique as detailed above can be used.

Cats are not small dogs. Different pathology and different anatomy requires different skills to extract feline teeth. Perhaps the most common reason for extraction of feline teeth is due to the presence of a resorptive lesion (RL). RL’s may be identified as either a type 1 (roots remain relatively unaffected by the resorption) or type 2 (replacement resorption of the roots with loss of the periodontal ligament, dentinal structure and root canal system of the root and replacement with bone). The type of the RL can only be identified radiographically. It is important to know what type of lesion is affecting the tooth as the treatment options vary.

This technique is used when a tooth is undergoing resorption and there is no normal root structure remaining. This technique can only be used after a diagnosis of type 2 resorptive lesions has been made radiographically.

During the anaesthetic and immediately after the dental procedure the temperature of the pet should be monitored closely and warmth provided if needed, as hypothermia is a major concern during extensive dental procedures. Good analgesia should be administered throughout and antibiotic cover should be given at the veterinary surgeons discretion.

The animal should then be monitored for any oral bleeding or epistaxis. A little blood-tinged saliva is normal but excessive haemorhage should be dealt with immediately by the veterinary surgeon.

The owner needs to be informed that there may be some bloody saliva from the mouth for the first 24 hours and gentle cleaning may be done with warm water or a saline solution.

Feeding post operatively is important and the animal should be encouraged to eat as soon as it is awake with a suitable post operative diet. Water should be available. If multiple extractions have been performed, soft food of a suitable calorific intake should be offered for the first 5 days. Usually the mouth should heal within the first week after which the pets’ usual diet may be resumed. If the pet has had a single extraction then its usual diet can be offered immediately after anaesthetic recovery.

A chlorhexidine mouthwash can be dispensed for the owner to use at home to help reduce plaque buildup whilst the mouth is healing. If none or few extractions were performed then tooth brushing can be instigated immediately.