The eye is a paired organ, the organ of vision. The eye is made up of various components, which enable it to receive light stimuli from the environment, and deliver this stimuli to the brain in the form of an electrical signal. Vision involves all components of the eye.

The eye is contained within the bony orbit of the head. The bony orbit is a cavity, comprising parts of the lacrimal bone (includes fossa for nasolacrimal duct) and the maxilla (includes caudal foramen of infraorbital canal). It is continuous with the temporal bone and the pterygopalatine fossa caudally. The bony orbit is located laterally in herbivores, but is set forward in hunting animals, that is carnivores.

Movement of the eyeball is achieved through the contraction and relaxation of six extraocular muscles:

5. Endothelium (inner lining of the cornea)

The Wall (retina, uvea and sclera)

1. non-visual retina (lines the back of the ciliary body)

2. optic part of the retina

The non-visual part of the retina is lined by inner and outer single-layers of epithelium: the outer layer is pigmented, the inner layer is neural. This neural inner layer contains photoreceptors, interneurons, ganglion cells and associated stromal cells, called MÜLLER cells. Rods and cones are photosensitive receptor cells, and are found in the optic part of the retina: rods are mainly utilised at night, as they are highly sensitive receptors to black and white, while cones are mainly utilised during the day as they are used for colour vision. The fovea is an area of the retina that contains mostly cones, and in high numbers. Here, oxygen is obtained from the choroid (a pigmented layer that makes up part of the uveal tract - mentioned further down) by diffusion. In this region, there is one nerve fibre per cone.

Layers of the retina, from vitreous humour to choroid:

2. ciliary body: produces aqueous humour and vitreous humour, and is involved in lens accommodation, as its muscle fibres stretch the lens into a flatter shape, allowing distant vision 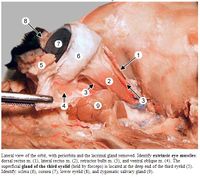 All of the extraocular muscles originate at the equator of the eyeball. 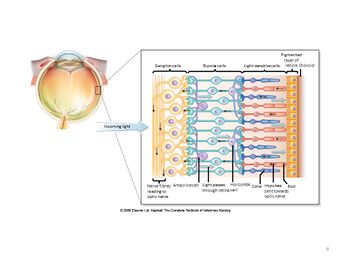 Accommodation is primarily achieved by the lens, which is stretched by rectus muscle fibres of the ciliary body, causing the optical power of the eye to increase. This allows the eye to maintain a clear focus on an object, especially as the animal moves nearer towards the object.

Autonomic Innervation of the Eye

Rod cells are mainly used at night (scotopic vision), as they function at lower light intensity. Rods are so-named due to their cylindrical shape. They are positioned in higher numbers at the edges of the retina, so are also used in peripheral vision. Rod cells are a lot more sensitive to light than cone cells, meaning that they require less light to function than cones, this being the reason that they are the predominant cells providing visual information at night. However, many rod cells converge into one interneuron, meaning that signals are amplified, but visual acuity is not as great, so the visual information that is collected may be less distinct.

Rod cells contain a pigment called rhodopsin, which itself consists of a protein called opsin. Bound to opsin is a molecule called retinene - a derivative of vitamin A. Retinene exists in the form of cis-retinene, an aldehyde, when in the dark. When stimulated by light, the cis-retinene undergoes structural change to form trans-retinene:

This leads to hyperpolarisation of the cell.

When rods and cones are not being activated, they are in a state of depolarisation, and release a neurotransmitter – rods cells release glutamate, cone cells release acetylcholine. This state of depolarisation is achieved in darkness, because the cells have a high concentration of cGMP, which causes the opening of ion channels. Sodium and calcium ions pass through these ion channels, and its their positive charges that cause the depolarisation of the cell, which leads to the release of neurotransmitters. When light hits the rod and cone cells, the cis-retinene undergoes structural change to become trans-retinene (explained above). This structural change causes the activation of transducin, which is a regulatory protein. Transducin activates cGMP phosphodiesterase, which causes the break-down of cGMP into GMP. This action allows the sodium channels to close, thereby preventing influx of positive ions, which leads to hyperpolarisation of the cell, and therefore also preventing the release of neurotransmitters.

The breakdown of one molecule of rhodopsin leads to signal amplification, so more molecules of rhodopsin are activated, hence rod cells being highly sensitive to small amounts of light. However, when rod cells are exposed to high levels of light intensity for prolonged periods of time, they become desensitised.

Cone cells function better in higher intensities of light (photopic vision). Most cone cells are found concentrated in the fovea. The fovea is the region of the retina where the retinal layers are parted, allowing light to fall directly onto the cone cells. Cone cells provide greater visual acuity, as each cone synapses with a single interneuron, meaning that the visual signal is not amplified, therefore is more distinct.

Cone cells respond to light in the same way as rod cells. The only difference is that the pigment present in cone cells is iodopsin, as opposed to rhodopsin. Retinene that is bound to opsin within the iodopsin is stimulated in the presence of light to undergo structural change to form trans-retinene.

The optic nerve (CN II) is a paired nerve that carries visual information from the retina to the brain. The ganglion cell axons leave the retina and information passes through the optic nerve to the optic chiasm, where some nerve fibres cross over. The optic tract (the optic nerve fibres) wraps around the cerebral peduncles of the midbrain, where it passes into the lateral geniculate nucleus, which is part of the thalamus. Most of the optic tract axons synapse here, and the remaining fibres branch off and synapse in the pretectal nuclei of the superior colliculi. The integrated visual information is then passed via nerve fibres to the cerebral cortex.

Reflexes with Optic Nerve as the Sensory Arm

1. Pupillary light reflex: the constriction of a pupil in response to increased light intensity, and a dilatation of a pupil in response to a decreased light intensity. This reflex also involves parasympathetic fibres of the Oculomotor nerve (CN III). The presence of this reflex shows the efficiency of the retina, the optic and oculomotor nerves, and the musculature of the iris.

2. Pupil dilation: also called mydriasis. It is a sympathetic response.

3. Menace response: involves the facial nerve (CN VII) in the motor arm of the reflex. The response also requires integration from the cerebral cortex, the cerebellum and the rostral colliculi. However, the menace response is a learned response, so it will not be present in the first few weeks of life.

Neurological examination of the equine eye