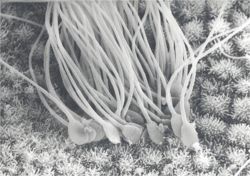 Fusion with the Oocyte

N.B: Although sperm mitochondria enters the Ooctye cytoplasm, they carry a ubiquitin signal. They are subsequently destroyed by Ubiquiitinase and do NOT contribute to mitochondrial DNA. Therefore mitochondial DNA is entirely from the maternal side.