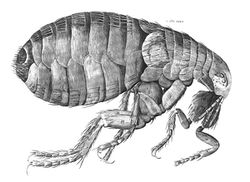 Fleas make up the taxonomical order Siphonaptera containing approximately 2500 species all of which are very similar in morphology. All are obligate blood feeders, which is apparent in the morphology of the mouthparts. Though they are all small, between 1 and 6mm, there is considerable sexual dimporphism, the females being larger than the males. The body of the flea is laterally flattened to allow for easy movement between hair and feathers and also to improve jumping.

The head holds the mouthparts, eyes and antennae of the flea. The eyes of the flea, when present, are little more than photosensitive spots either side of the head. As an adaptation to allow easy movement between the hairs or feathers of the host the fleas antennae are short and sunken into the head so as not to protrude. The head may also hold backwards facing ctenidia or combs that protrude ventrally from the head and are an adaptation to prevent their easy removal from the hairs and skin of the host by preening or grooming. On the head these combs are referred to as genal ctenidia to differentiate them from the combs found on the body. The presence, number and position of these combs is an important feature in flea identification.

The mouthparts of the flea are adapted to piercing and sucking to enable feeding on the blood of the host. The most prominent feature are the well developed maxillary palps.

The first section or pronotum of the body behind the head may hold further ctenidia to prevent easy removal. when these combs are present on the body they are often referred to as pronotal ctenidia. The remainder of the body caudally is the abdomen containing the digestive and reproductive organs of the flea. At the posterior end of the body are the fleas genitalia.

Fleas are 6 legged, the two front pairs are considerably shorter than the most caudal pair. They are made up of 5 parts; coxa, femur, tibia, tarsus and claw from proximal to distal. The increased length of the most caudal legs is an adaptation to increase the distance that the flea can jump. This allows the flea to easily move between hosts, one of them major reasons for their veterinary importance.