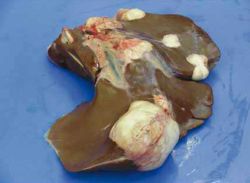 Hydatid cysts and the chronic remnants of these are frequently found at post-mortems carried out at The Donkey Sanctuary. 7.8% of livers examined had a lesion indicative of a hydatid cyst. A higher incidence of hydatid cysts has been found in donkeys admitted from Ireland and Wales. In the UK, endemic areas for E. granulosus are mainly confined to the Powys area of Wales and the Outer Hebrides in Scotland. In parts of the tropics, where dogs have access to carcasses, the prevalence can be particularly high.

Hydatid cysts are the intermediate larval stage (metacestode) of the canine tapeworm, Echinococcus granulosus, which has dogs and foxes as the final host. Donkeys and horses are generally infected with the strain Echinococcus granulosus equinus, which has different host predilections from the strains that are adapted to ruminants and man. The donkey and horse act as intermediate hosts in which hydatid cysts form.

Donkeys ingest the eggs of E. granulosus from pastures or feed contaminated with canine faeces. Ingested tapeworm eggs migrate from the donkey’s intestine to the liver, lung and, to a lesser extent, to other organs where they form cysts and grow slowly reaching up to 6 or 7 cm diameter.

Most cysts are asymptomatic and are found as incidental findings at post-mortem. However, in large numbers, cysts can affect organ function. Clinical signs depend on the location of the cyst, severity of infection and size of the cyst, and are related to dysfunction of the liver.

The cysts can be visualised using ultrasonography.

Drainage of cysts can seed daughter cysts and induce anaphylaxis, although success has been reported in treating a horse with an isolated retrobulbar cyst (Summerhayes and Mantell, 1995).