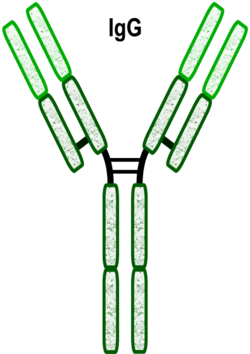 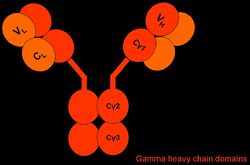 IgG is the major antibody in blood plasma, and constitutes at least 80% of all antibodies in the body. It is the smallest immunoglobulin, so can readily leave the blood plasma and enter tissues. They can also cross the placenta, providing adaptive immunity to the foetus when the mother is under attack. IgG is also present in breast milk.

IgG is Y-shaped, with three constant regions and a heavy chain subunit type γ. There are several different IgG subclasses, depending on the species coded for by the IGHG gene.

Have three subclasses, G1-G3. IgG1 is the major antibody in ruminant mucosal secretions and colostrum.

IgG is produced by plasma cells in the spleen, bone marrow and lymph nodes.

Some IgG subclasses can activate complement via the classical pathway. Some subclasses act as targets for macrophages, eosinophils and neutrophils. It is therefore the major antibody in tissue fluids and lymph. IgG specifically binds to antigens on bacteria, causing agglutination and opsonisation.