General anaesthesia is required for radiography. Ideally clinical examination and recording should precede the radiographic evaluation. It is also useful to clean the teeth before any radiographs are taken. Dental calculus, because it is radiodense, can obscure pathological lesions on a radiograph.

The parallel technique is used whenever it is technically possible to place the film parallel to the axis of the tooth roots. In dogs and cats, this applies to the distal mandibular teeth. The film cannot be placed parallel to the teeth in the rostral mandibular premolar region due to the mandibular symphysis and angle of the roots relative to the oral surfaces. This is also the case for the maxillary teeth. 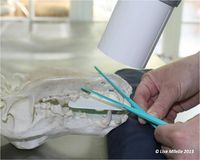 When radiographing teeth other than the mandibular premolars and molars it is not anatomically possible to position the film parallel to the tooth root. The bisecting angle technique uses a principle of geometry (the two sides of an isosceles triangle are equal in length) to prevent image elongation or foreshortening.

Left and right view for each of the canines of the upper jaw - Size 4 (occlusal) film in dogs is helpful to avoid missing the root apex. Size 2 film can be used in cats and small dogs. The film is placed horizontally in the mouth with the canine cusp tip on the outside, rostral corner of the film. The tube is positioned to bisect the angle when viewed from the side, and angled laterally from a dorsovental (DV) position when viewed from the front. This projects the root tip to the opposite corner of the film from the cusp tip.

Lateral canine and rostral (mesial) mandibular premolars - The mandibular canine and rostral premolar teeth are adjacent to the symphysis, requiring the film to be placed along the floor of the mouth, on top of the tongue to avoid the frenulum preventing the film being placed correctly. The tube is positioned to bisect the angle when viewed from the front, and perpendicular to the film when viewed from the side or top.

Lateral view of the distal premolars and molar teeth of the mandible - This is the one region in which parallel technique can routinely be used. The film is placed into the space between the tongue and the lingual surface of the mandible, positioned apically so the cusp tip is level with the top of the film. The tube is positioned perpendicular to the plane of the tooth roots and to the film.

Structures that are superimposed can be separated on the radiograph by shifting the tube-head in the third axis while maintaining the bisecting angle in the plane that includes the axis of the root and the edge (plane) of the film. For example, when making a radiograph of the premolar region, the tube-shift redirects the x-ray beam to a mesial-to-distal or distal-to-mesial direction while maintaining the bisecting angle position when viewed from the front of the patient (transverse plane). Shifting the tube mesially (mesiobuccal to distopalatal beam) moves objects that are closer to the tube-head distally on the radiograph image and objects that are closer to the film mesially.

Conversely, when the tube-head is shifted distally (distobuccal to mesiopalatal beam), objects that are closer to the tube-head will move mesially on the radiograph, while objects closer to the film will move distally on the radiograph. In other words, objects on the radiograph that move the same direction that the tube was shifted are on the palatal/lingual side, while objects that move the opposite direction from which the tube was shifted are on the buccal/labial side. A helpful acronym to remember this relationship is the SLOB rule, which stands for Same Lingual Opposite Buccal.