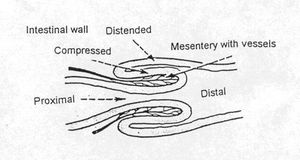 Intussusceptions can be classified according to their location in the gastrointestinal tract. They usually occur in regions where there is a significant change in lumen diameter, such as ileocolic and gastroesphageal junctions. Ileocolic intussusceptions are most common, they frequently protrude from the rectum and must be distinguished from a rectal prolapse. In the case of an intussusception, it is possible to pass a probe next to the anus, but not in a rectal prolapse.

Depending on the site and severity, an intussusception results in a partial or complete obstruction to the gastrointestinal tract causing hypovolaemia, dehydration and shock. The condition is potentially serious and should be treated as an emergency.

Intussusception results from abnormal peristalsis. Vigorous contractions force the more proximal intestine to invaginate into the adjacent distal portion, taking its mesenteric attachment with it. Obstruction of the gastrointestinal tract causes distention which may lead to rupture and peritonitis. Compression of the mesenteric vessels cause vascular compromise to the intestine, resulting in venous congestion, oedema and if the aterial supply is damaged, full thickness necrosis. An inflammatory exudate is released from the serosal surface and fibrinous adhesions may form, making the structure irreducible.

Intussusception normally occurs due to gastrointestinal disease, although it is often hard to identify the cause. It is associated with any condition that increases peristalsis such as

Young animals are most commonly affected, 80% of cases are less than a year old.

Clinical signs vary depending on location, duration and the degree of obstruction and vascular compromise.

Plain abdominal radiographs do not always provide a definitive diagnosis. In cases of complete obstruction distented loops of intestine and a tubular soft tissue mass are usually obvious, but a partial obstruction will produce much more subtle signs which may be missed.

A barium enema or upper gastrointestinal contrast study can be useful in identifying the site of obstruction but may result in delay of treatment and should be used cautiously as leakage of contrast into the abdominal cavity will result in peritonitis. The classic appearance of an intussusception is described as a 'coiled spring'.

Abdominal ultrasound will reveal a cylindrical mass with layering of the intestinal wall. The intestines may also be hypomotile, with distension proximal to the obstruction.

Colonoscopy can identify ileocolic or caecocolic intussusception. Oesopgagoscopy can reveal a gastroesophageal intussusception, a soft tissue mass is visible in the lumen of the oesophagus.

The degree of damage to the intestine depends on the severity of the intussusception. In severe or chronic cases fibrinous adhesions form between surfaces making the structure irreducible. Necrosis of the tissue usually follows.

Intussusception may occur due to post mortem change, in this case there are no other associated changes and the invaginated intestine is easily reducible.

Fluid therapy and correction of electrolyte and acid-base abnormalities should be carried out prior to surgical correction.

Surgery is required to manually reduce the intussusception, it may be necessary to resect and anastomose the intestine in cases where the adhesions have formed. This decision depends on the viability of the intestines, as determined by the colour, vascular supply and presence or absence of peristalsis.It is important to preserve as much of the intestine as possible to avoid short bowel syndrome.

Complications include dehiscence at the site of anastomosis, peritonitis, recurrence (11-20%, most common within 1-5 days post surgery), ileus, intestinal obstruction and short bowel syndrome.

Recurrence can be prevented by enteroplication of the small intestine, or by a left-sided gastroplexy of the fundus in cases of gastroesophageal intussusception.

This depends on the location, completeness and duration of the intusussception. The prognosis is good in animals treated with early surgical intervention and aggressive supportive care. The prognosis is poor for animals with perforated intestine and peritonitis.