This is the largest genus of hard ticks globally and can be identified by;

There are a number of Ixodes species present in the UK, however the most prevalent are I.ricinus, I.canisuga and I.trianguliceps.

This hard tick is found throughout Europe and north Africa living in woodland, forests and bushes. Its life cycle can last between 1 and 6 years but normally takes 2 or 3 and involves three hosts. When feeding the female can grow up to 200 times her original size, feeding also causes paralysis in the host. The adults will target medium to large mammals such as sheep, cattle, dogs, deer, horses and humans whilst the larval and nymphal stages will attack smaller mammals, birds and reptiles. Once the adult female has fed once for a number of hours and mated on the host she will drop to the floor and lay her eggs in matted vegetation before dieing. I.ricinus is known to transmit Lyme disease (Borrelia burgdorferi) to cattle, horse and humans as well as Q fever (Coxiella burnetti). There a number of other infectious agents transmitted by Ixodes species including Babesia divergens, B.bovis, B.ovis, Rickettsia conorii, Anaplasma marginale, Ehrlichia phagocytophila and Staphylococcus aureus.

This is a host specific tick of dogs and lives in kennels in the UK and throughout Europe. Again it is a three host tick that can be active throughout the year. Females do not engorge greatly when feeding and although usually species specific the tick can spread disease to other animals such as badgers, minks, foxes and cats. In Russia the tick is known to spread Pasteurella pestis which causes plague.

All stages of this tick attack small mammals such as mice, rats and voles but also accidentally found on man, horses, small birds and lizards. This tick is also a three host tick that lives in humid forested locations. It is known to transmit Babesia microti (human babesiosis) as well as Q fever, TBE, tuleraemia, Lyme disease and Louping ill.

This is known as the hedgehog tick however it will also affect dogs, cats, ferrets and weasels. This is commonly seen in small animal practice. 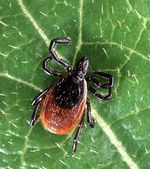 This tick is found in wooded areas throughout North America and can infect all mammals and birds but the favoured host is the Deer. It requires a high humidity in order to sruvive and so will only quest for hosts when conditions are suitable, around August and May time. This is a three host tick that takes 3 years to complete its life cycle although in this period it only feeds for about 28 days. The tick feeds once at each stage of its life, except the adult male that will feed intermittently and remain on the host to mate. Mating takes place on the host, following which the female will feed for about 14 days before being shed from the host to lay eggs in a sheltered area before dieing. The bites from I. scapularis are painful, more importantly however these ticks are the most common vector of Lyme disease in North America. These ticks are important zoonotically as the main vectors of human granulocytic ehrlichiosis.

Found in Australia and infects all mammals and birds but is of importance in catlle, sheep, goats, dogs and cats. It is a three host tick and has a standard Ixodes life cycle (as described above). These ticks are the primary cause of tick paralysis in Australia, reportedly responsible for upwards of 20000 cases of paralysis in domestic animals annualy. Even in infection with a small number of ticks, or the developmental stages, they can cause death in animals particularly in young calves. On top of the paralytic ability of these ticks they are vectors for Rickettsia australis, Queensland tick typhus, and Coxiella burnetti, Q fever.