The jejunum continues from the duodenum and leads into the ileum. It is the longest part of the small intestine and is highly coiled. It has digestive and absorptive functions. 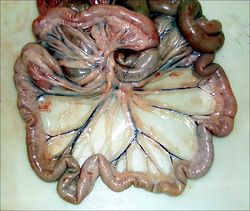 Jejunum occupies the ventral part of the abdominal cavity, filling those parts that are not occupied by other viscera. This produces species variation (see species differences). It lies on the abdominal floor, separated from the parietal peritoneum by the greater omentum. It is suspended by the mesentery (mesojejunum). This conveys the blood vessels and nerves and houses lymph nodes. The mesentery converges to its root. This is where the cranial mesenteric artery branches off from the aorta.

The position of the jejunum is variable between species as it lies in that part of the abdomen not occupied by other viscera.

The jejunum lies roughly symmetrically about the midline. It contacts the liver, stomach and spleen cranially and urinary bladder ventrally.

The jejunum is confined to the left dorsal part of the abdomen. It is restricted to this position by the large caecum on the right, and ascending colon ventrally on both sides.

The jejunum is pushed entirely to the right side of the abdomen by the rumen which is on the left. Coils of the jejunum usually lie within the supraomental recess; although this can vary between individuals depending on fullness of the rumen and size of the uterus.

The jejunum lies in the caudoventral aspect of the abdominal cavity, mainly to the right of the midline. This is due to the presence of the ascending colon on the left.