Longwool breeds are characterised by their lack of horns, large size/frame, long wool with a silvery and glistening appearance. They have a heavy, long fleece and all-white face and legs. They are typically used to crossbreed with draft hill ewes. Compared to hill sheep, they are faster growing. 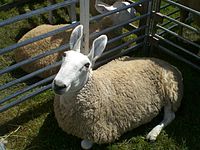