Difference between revisions of "Melioidosis"

From WikiVet English
Melioidosis
Jump to navigation Jump to search 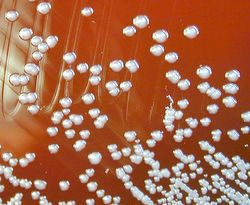 Burkholderia pseudomallei is a species of the Burkholderia genus. B.pseudomallei causes melioidosis, an opportunistic infection which is endemic in Asia and Australia. It primarily infects rodents.

Infection occurs via ingestion, inhalation or via skin wounds from the environment. The bacteria contains an exotoxin, dermonecrotic protease and lecithinase which is implicated in pathogenicity. Strain virulence and host immunosuppression is important. Burkholderia pseudomallei is also motile, by polar flagellae.

Diagnosis of the B.pseudomallei bacteria can be made via specimens, including; pus from abscesses, affected tissues and blood. The fluorescent antibody technique can be done on tissue smears. B.pseudomallei grows on blood agar and MacConkey agar plates, incubated aerobically. The colonies have a musty smell and you see lactose fermentation on MacConkey. Slide agglutination, ELISA, complement fixation and indirect haemagglutination tests for serum antibodies are also all diagnostic of B.pseudomallei.