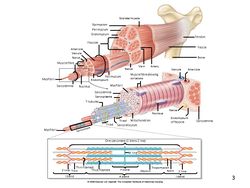 Muscle mass accounts for a large majority of the carcass weight of domestic animals. Muscular contraction is necessary for voluntary and involuntary movement of limbs, stabilization of joints, maintaining luminal diameter (in the case of arteries, bowel, etc), and to produce heat. The number of muscle fibers an individual possesses is determined by genetics and is set at birth, although muscle size and type (i.e. glycolytic to oxidative and vice versa) can be altered. Further muscle development therefore occurs by hypertrophy, rather than hyperplasia of muscle fibers. Three types of muscle can be described:

2. Smooth (also referred to as Visceral) 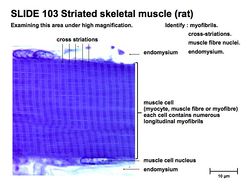 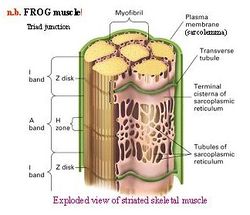 Each muscle belly is composed of multiple fascicles, each of which consists of a bundle of muscle fibers. Muscle "fiber" means a single cell, which is multi-nucleate, and known as syncitia.

Parallel fibers: Run from origin to insertion, long fibers allow for a faster contraction and a greater range of motion.

Pennate fibers: Run at an angle to the line of pull of an internal tendon or aponeurosis. Short fibers allow for a greater force capacity.

Within each fiber are groups of parallel, longitudinal myofibrils. Myofibrils are arranged as sarcomeres, bound by Z-discs, which are the functional unit of muscle contraction. Each sarcomere contains two separate groups of myofilaments:

There are two basic types of skeletal myofibre:

Muscle activation is initiated by a nervous impulse crossing the neuromuscular junction. Each muscle fiber is controlled by a single motor neuron. The neurotransmitter, acetylcholine (Ach), binds receptors in the muscle fiber to open Na+ channels. This causes a wave of depolarization along the sarcoplasmic membrane, further opening voltage-gated Na+ channels, which propagates the signal along the sarcolemma. Depolarization of the sarcoplasmic reticulum causes calcium to be released, which activates muscle contraction.

Muscle contraction occurs when (thin) actin filaments slide past (thick) myosin filaments. The myosin heads bind actin subunits, forming cross-bridges, hydrolyzing ATP and providing energy for contraction. Myosin heads undergo power stroke, displacing actin and releasing ADP and Pi. In the off state, tropomyosin coiled-coils block the helical grooves of the actin filament. Tropomyosin movement relieves the steric block, allowing access to myosin binding sites. Calcium regulates muscle contraction by binding troponin-C, which is attached to the thin filament. This causes inhibition of the steric block keeping actin and myosin from interacting. Increased calcium causes a negative feedback inhibition of Ca release, and it is pumped back into the sarcoplasmic reticulum by the Ca/ATPase pump. 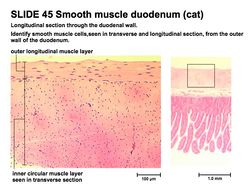 Cardiac muscle is striated but uninucleate and highly vascularized. There are gap junctions concentrated at intercalated discs.

Myogenic Contraction spreads cell to cell and does not depend on nervous input to individual cells. Areas of low electrical resistance allow rapid spread of action potentials. Contraction is regulated by autonomic neurons and circulating hormones. The contractile mechanism is similar to skeletal muscle, an increase in cytosolic Ca. There is a Ca influx across the plasma membrane AND the sarcoplasmic reticulum. The action potential has a prolonged plateau phase. 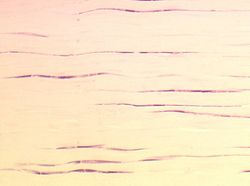 A tendon is a connective tissue point of attachment between muscle and bone. It consists of dense collagen type 1 fibres and fibroblasts (tenocytes). They possess great tensile strength and are highly elastic. This is important in absorbing and storing energy. An elastic recoil provides a crucial role in locomotion. Tendons can be protected by sesamoid bones at a point of angulation over a bony surface. Fluid-filled bursae provide cushioning and protection where necessary. Walls and sheaths resemble synovial joint components.

Click here for information on bursae and tendons pathology.