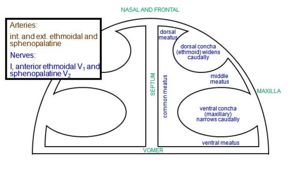 The respiratory tract begins with the nose which includes the external nose, internal nasal cavities and paranasal sinuses. As well as being vital for transport of gases to the lower respiratory tract, the nasal cavity is also the site for one of the special senses - Olfaction.

The nose consists of the external nares with nasal cartilages, the nasal cavity (including the nasal meatus and conchae), and the paranasal sinuses.

Dorsal: The maxilla and the palatine processes of the incisive bone. 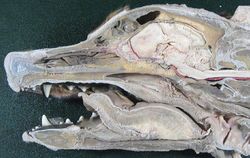 The nasal cavity can be seen filled with conchae in this photograph of a canine head. ©Nottingham 2008

The nasal cavity is occupied to a large extent by nasal conchae. These are turbinate bones which project into the nasal cavity with the purpose of supporting the olfactory mucus membranes and increasing the respiratory surface area, creating turbulence within the passing air. This helps to filter and warm or cool the air that passes through.

The conchae are cartilage or ossified scrolls which arise from the ethmoid bone. They are covered with mucous membrane, under which is a layer of anastomosing blood vessels. The nasal conchae are more complex in animals with a better sense of smell, as they increase the surface area of the olfactory region, further.

There are dorsal and ventral conchae, the dorsal concha originating from the ethmoid bone and attaching to the maxilla, and the ventral conchae originating from the maxilla and extending further into the nasal cavity. The conchae divide the nasal cavity into nasal ducts or meatuses, which branch out from a common nasal meatus which is adjacent to the nasal septum. There are three nasal meatuses which branch from the common nasal meatus: dorsal, middle and ventral:

Dorsal nasal meatus The passage between the roof of the nasal cavity and the dorsal nasal concha.

Middle nasal meatus Between the dorsal and ventral conchae, it communicates with the paranasal sinuses.

Ventral nasal meatus The main pathway for airflow leading to the pharynx, it is positioned between the ventral nasal concha and the floor of the nasal cavity.

Common nasal meatus The longitudinal space on either side of the nasal septum.

In addition to olfaction, the function of the nasal cavity is to modify the incoming air before it is transported further down the respiratory tract. Air is warmed as it passes over the highly vascularised mucosal surfaces of the conchae, humidified by the evaporation from nasal secretion and cleaned as it contacts the secretion from mucus glands within the nasal cavity. The mucus secreted from the glands traps particles and cilia transport them down to the pharynx for swallowing, this process is known as the mucociliary escalator. The nasal cavity offers further protection via the sneezing reflex .

The nasal cavity in the sheep is highly vascularised, with any damage to the epithelium resulting in severe haemorrhage. Cattle have a smaller nasal cavity compared to the horse. There are many variations to the entire avian respiratory tract. The respiratory systems of non-homeotherms are also very different to that of mammals.

Click here for information on pathology of the nasal cavity.

PLUS Protocol – Pleural &amp; Lung Ultrasound
This webinar will explain the methodology to perform a PLUS (pleural and lung ultrasound) protocol. The main abnormalities any practitioner should be easily picking up regarding pleural space disea...
Dr Kris Gommeren 2022-05-18 10:27:16
Thoracic ultrasound and its value in bovine respiratory disease
This session will cover the value of thoracic ultrasound regarding the diagnosis and prognosis for different types of thoracic disease in calves and adults.&nbsp;&nbsp;&nbsp;&nbsp;&...
Professor. Gayle Hallowell 2022-01-06 20:05:59
Tumours of the Respiratory Tract
This lecture will discuss the clinical presentation, differential diagnoses, diagnostic procedures, therapies and outcomes associated with the common tumors of the respiratory tract (nasal, mediast...
Douglas Thamm 2021-12-01 14:51:47
Tracheostomy Tubes
There are many reasons why a patient may need a tracheostomy tube placed and with the rise in popularity in brachycephalic breeds, it is likely that tracheostomy tubes will be more frequently neede...
Chloe Fay 2021-09-15 20:20:52
A new look at Acute Upper Respiratory Tract Disease – more treatable than we thought?
TBCFurther reading with Vetlexicon:Canis Acute respiratory distress syndromeFelis viral induced upper respiratory tract disease
Danielle Gunn-Moore 2021-07-26 11:56:11
Emergencias del tracto respiratorio (Español)
La obstrucci&oacute;n del tracto respiratorio superior puede poner r&aacute;pidamente en peligro la vida. Es importante que los veterinarios sepan cu&aacute;ndo y c&oacute;mo realiz...
Louise Southwood 2021-02-27 10:08:33
Respiratory tract emergencies
Upper respiratory tract obstruction can be rapidly life-threatening. It is important that veterinarians have knowledge of when and how to perform an emergency temporary tracheostomy and understand...
Louise Southwood 2021-02-27 09:57:11
Use of inhaled medications to treat respiratory diseases in dogs and cats
Inflammatory diseases/disorders of the respiratory tract including chronic bronchitis and asthma are common conditions in veterinary medicine. Historically we have used systemically absorbed cortic...
Phil Padrid 2021-02-18 15:00:00
Veterinary Care in the Face of COVID-19: Equine Respiratory Distress - Video Triage &amp; Management
The webinar will help guide vets through decision making when presented with a horse in respiratory distress during COVID-19 lockdown. It will cover what cases need to be seen urgently and what man...
Adele Williams 2021-01-13 14:49:26
How do I evaluate the Coughing Dog
Coughing is a protective mechanism which allows clearance of debris from the airway, but can be very irritating in excess to both to the patient and their owners! Airway irritation and inflammation...
Simon Tappin 2021-01-05 14:12:55