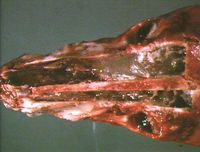 Rhinitis can be acute or chronic.

Its aetiology can be:

Serous cells are usually the first to respond to a noxious agent, releasing secretions into the mucocilliary blanket.

Different forms of rhinitis can be described:

Serous rhinitis is the typical mild 'runny nose'. There is loss of cilia and hydropic degeneration of epithelial cells. The epithelium becomes susceptible to secondary bacterial infections, including overgrowth of resident nasopharyngeal flora. Goblet cells become stimulated, changing the secretions into a thick opaque mucus.

Mucopurulent and then purulent rhinitisoccurs when secondary bacterial infection is severe, migrating neutrophils are present in the exudate.

More severe damage to the nasal mucosa causes vascular permeability and seepage of large molecular weight proteins, including fibrinogen, into the exudate leading to fibrinopurulent and fibrinous rhinitis.

Fibronecrotic and ulcerative rhinitis are manifestations of very severe damage to the nasal mucosa.

This occurs when acute rhinitis fails to resolve and is common in most species. It is typically catarrhal or purulent in nature.

In chronic purulent rhinitis there is extensive fibrosis of the lamina propria, atrophy of the nasal glands and squamous cell metaplasia. These all result in impaired local defences.

Usually, the superficial fibrinous membrane can be peeled off without leaving damaged tissue underneath.

Deeper fibronecrotic lesions associated with Fusobacterium necrophorum appear as a yellowish fibronecrotic membrane, which when removed leaves an ulcerated surface.

Chronic rhinitis may manifest as nasal polyps, progressive haematoma in horses and nasopharyngeal polyps of cats.

This occurs in dogs, cats and horses, and may occur seasonally in cattle, especially Channel Island breeds.

There are similar inflammatory changes as above, due to hypersensitivity to inhaled allergens. Eosinophils tend to be the dominant infiltrating leukocytes.

Grossly: the nasal mucosa is pale, thick and oedematous.

Histologically: the nasal epithelium is hyperplastic and eroded with an eosinophil infiltrate.

If the condition is chronic it may become a nasal granuloma, which extends caudally, even to the larynx and proximal trachea.

Sinusitis is a common sequel to rhinitis