Difference between revisions of "Rhipicephalus spp."

Rhipicephalus spp are mostly three host ticks, although some have a two host life cycle. They are commonly found on mammals but rarely infest reptiles and birds. Rhipicephalus spp. can be identified by; 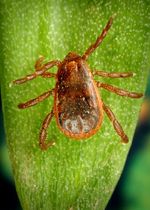 This species is found throughout the world, mainly affecting dogs but also found on other mammals and birds including humans. In dogs its main predilection sites are behind the ears and between the toes. In the UK these ticks are found in houses and kennels as the outdoor conditions are not suitable, however in warmer climates the ticks can be found outdoors. This adult tick is yellow/brown in colour, while larvae are light brown and nymphs reddish. The adults can vary in size from 3mm up to 12mm in the engorged female. It is a three host tick and can complete its life cycle in 4 - 5 months, though this may take longer in colder conditions. Mating takes place on the host and once inseminated the female will feed for a number of days before shedding from the host. She will then lay approximately 4000 eggs in raised, sheltered spots and so eggs can often be found in kennel roof spaces. In dogs this tick can cause paralysis as well as acting as a vector for Lyme disease (Borrelia burgdorferi), Babesia canis, B.gibson, Ehrlichia canis, E.vogeli, Salmonella enteritidis, Hepatozoon canis, Rickettsia conorii, Q fever, as well as Rickettsia rickettsii (Rocky mountain spotted fever) in parts of the USA and Mexico.