Difference between revisions of "Snake Dysecdysis" 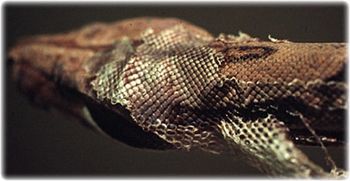 The entire skin is shed on a regular basis, often two to four times a year. The frequency depends upon the rapidity of growth, age, nutritional state, size and environmental factors.

Prior to shedding there is an inactive period of about a week during which the spectacle becomes opaque. Fissure-like clefts form between the inner dividing epidermal cells and the older cells as these migrate outward. A new three layered epidermis is formed under the old outer layers. Lymph diffuses into the area between the old and new skin and enzymes form a cleavage zone. Air is present between the two layers and interferes with ultrasonography. Ecdysis then occurs as the snake rubs itself on objects in the environment to loosen the old skin. Most snakes shed their skin in one piece, except for the giant snakes that may tear their moult. The process takes in total about two weeks.

Dysecdysis is improper or incomplete shedding. It may occur for various reasons including disease (mites, malnutrition, dermatitis or trauma) and problems of captivity (incorrect humidity, incorrect handling). Sometimes the spectacle fails to shed and remains as an opaque cover over the eye, restricting vision.