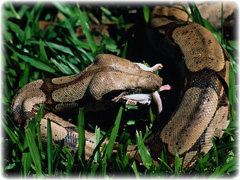 All snakes are carnivores. With over 2900 different species, some snakes have highly specialised diets (eggs, lizards, frogs, fish, fish eggs or invertebrates such as slugs or termites) while others are generalists and will eat a wide variety of prey items. Common pet snakes such as rat snakes, milk snakes, boas and pythons typically feed on rodents but some pet and many exhibition snakes require special diets. It is therefore necessary to have species-specific information to determine the most appropriate prey.

Snakes do not chew their food and prey is eaten whole, including up to 30% predigested vegetable matter which comes from the prey animal. The gastrointestinal tract of the snake is simple and relatively short compared to other reptiles. Due to this aspect of comparative physiology, it is vital that these animals are given a high quality diet in captivity to maximise the absorption of essential nutrients. Mechanical and enzymatic decomposition of food begins in the stomach. The glands possess epithelial (acinopeptic cells) that produce both pepsin and hydrochloric acid. Digestion is continued and completed in the small intestine.

The size of the prey can be about the same diameter as the snake's head. Snakes can be fed whole prey in order to mimic a snake's diet in the wild. The feeding of pieces of prey (for example feeding fish off-cuts to garter snakes) can lead to diet related diseases. In general snakes will eat whole animals and nutritional problems are relatively uncommon. Aquatic species usually prefer fish and amphibian prey items while arboreal snakes usually prefer avian and reptilian prey items. Terrestrial snakes will readily accept different prey items. 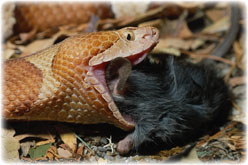 Potential aetiologies for anorexia in snakes that can be hard to acclimate to captivity include inappropriate prey type or size (see diets), inappropriate environmental temperatures (see housing), dehydration, and chronic disease.

Care of the prey item prior to feeding is important since nutritional deficiencies in the snake may occur if the animal being fed has been kept on an inappropriate diet. Similarly, if poor husbandry of prey items is practiced then they may serve as reservoirs for disease. Prey rodents should not have been treated with topical parasiticides such as permethrins, within three weeks of being offered to a snake (the dealer can confirm this). In addition, prey should not have been administered drugs such as antimicrobials and euthanasia compounds. In zoological institutions, prey is often frozen at 0°C as a method of food preservation.

Snakes are heavily reliant on olfactory cues when hunting (see snake special senses); therefore, pet owners may be encouraged to "scent" a mouse or rat by rubbing an atypical prey species to stimulate feeding.

Snakes derive a significant amount of water from their prey. Many species will also drink from standing water and therefore a large water basin that provides an additional soaking area is recommended. Soaking can help facilitate shedding and stimulate the gastrointestinal tract.