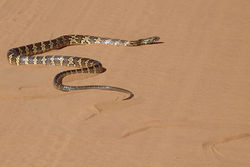 Lateral undulation is the type of locomotion usually associated with snakes (i.e. side to side wriggling). At any given time various areas of the snake’s body are pushing simultaneously against a number of fixed points. As the snake moves forward new contact points are made. This is identical for movement across desert, through branches or swimming.

This is common in burrowing snakes and can be seen when a snake crawls through a tube. While the back half of the body acts as an anchor the front half is pushed forward. The back half is then drawn forward.

The edges of the scales act as anchor points and the muscles then pull the body up to that point. This is often used by large snakes. The motion is similar to that of a caterpillar crawling and involves waves of bilaterally symmetrical muscle contractions.

This is similar to concertina locomotion but the angle of movement is at 45 degrees to the direction that the snake is pointing.