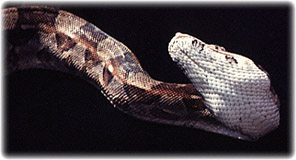 Typical "star-gazing" posture of a snake with neurological disease © RVC

Neurological disease is relatively common in snakes. Viral infections may present with neurological signs and hypothiaminosis is very common in garter snakes.

As with other problems of snakes, history-taking is critical for diagnosis. Signalment information can help determine the cause since many neurological diseases are more prevalent in certain taxa. Husbandry information will help to determine whether the nervous system is involved specifically or secondarily. Clinical signs of neurological disease in snakes vary from very subtle to severe. There may be only a mild decrease in activity and a drop off in appetite. More obvious signs include disorientation, incoordination, loss of righting reflex, paresis, paralysis, head tremors, opisthotonous and convulsions.

The aetiology of neurological disease can be suggested by signalment.

Disorientation and sluggishness may be attributed to a wide variety of causes but may be simply caused by an inappropriate environmental temperature. Stargazing in very suggestive of meningoencephalitis.

Physical examination may rule out cases of trauma. The use of diagnostic aids may identify the cause: radiography may reveal fractures, haematology may indicate an infectious cause, and serology may identify OPMV. Response to thiamine is diagnostic for hypothiaminosis. However, sometimes the aetiology is only found upon necropsy. Perivascular cuffing in CNS issue may be associated with viral infections.

There are many causes of neurological disease in snakes. Here’s a brief overview.

If the snake develops severe neurological signs such as ‘star-gazing’ prognosis is generally poor. This is because damage to nervous tissue is irreversible, as this tissue has very poor regenerative qualities.

Attention to diet and husbandry is usually the most important part of disease prevention.