The respiratory tract of snakes consists of external nares, nasal cavity, internal nares, glottis, trachea, bronchi, lung(s) and air sac. There is no diaphragm. The external nares communicate with the internal nares through the nasal cavity. The internal nares lie in the roof of the oral cavity and communicate directly with the glottis when the mouth is closed. The glottis lies posterior to the tongue and is not difficult to visualise, making intubation for anaesthesia relatively easy. During the feeding process, the glottis is able to move laterally to facilitate respiration while ingesting large prey items, a process which may take considerable time. 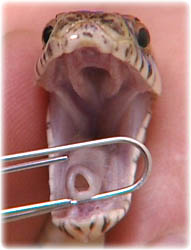 The trachea has incomplete cartilaginous rings. The ventral portion is rigid cartilage while the dorsal fourth is membranous. The trachea enters the lung at a level near the base of the heart. Some species of snakes have a unique saccular diverticulum of open tracheal rings that acts for hissing or as a tracheal lung for gas exchange when gastric contents preclude normal pulmonary function.

The lung morphology of snakes is very species-dependent but is obviously elongated. The left lung is always reduced but may vary from 85% of the length of the right lung to being absent. It is relatively well developed in boids but only vestigial in colubrids. The anterior part of the lung is non-respiratory and functions as an air sac for gas exchange. In boids and colubrids, the respiratory portion of the lung lies between the heart and the cranial liver whereas in most viperids and elapids it is cranial to the heart. The posterior part is thin-walled and non-respiratory, mainly functions as an air sac and contains a major portion of the volume of the respiratory tract. In terrestrial snakes this air sac terminates in the intestinal mesentery near the gallbladder while in aquatic species it may reach to the cloaca and is thicker and more muscular.