Vocalisation is an important evolutionary ability of birds. The extent of song varies in different avian species from complex pitches, patterns and rhythms in songbirds to the amusing squawk of penguins. Birds lack vocal folds so sound is produced in the syrinx, which is the avian equivalent of the mammalian vocal cords. 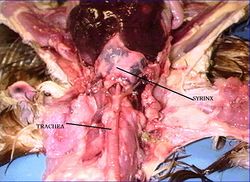 Anatomy of the Syrinx - Copyright RVC

The lateral and medial walls of the primary bronchi are membranous and flutter, which produces sound on expiration. An increased pressure in the clavicular air sac causes the tympanic membrane of the syrinx to be forced into the lumen and vibrate. Tension of the membranes is controlled by the tracheolateral muscles. Each half of the syrinx can function independently allowing 2 different notes to be produced at the same time. 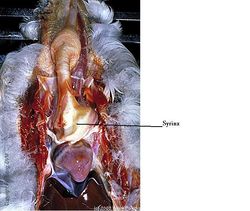 Drakes and Cobs (male swans) have an enlarged osseous bulla on the left side of the syrinx which acts as a resonator. Songbirds have a complex set of syringeal muscles. Sexual dimorphisms occurs in songbirds, with the males of the species usually producing a more complex birdsong, which directly relates to the size of the area of the brain responsible for song. Parrots have a thick tongue which allows them to make sounds similar to humans. Sound travels from the syrinx and is modified in the throat, tongue and mouth in parrots.