Anticoagulant rodenticides were first discovered during investigations into mouldy sweet clover poisoning in cattle1. In this condition, naturally occuring coumarin in clover is converted by fungi to a toxic agent, dicumarol, which causes a haemorrhagic syndrome when ingested. Initially, warfarin was synthesised and used in this way for rodent control, but as rodents have developed a resistance to the substance new, second generation anticoagulant rodenticides have been developed. These include coumarin (bromadiolone and brodifacoum) and indandione (pindone and diaphacinone) rodenticides, which along with warfarin may cause toxicity following accidental ingestion or malicious administration in animals.

Anticoagulant rodenticide toxiticy is one of the most common causes of acquired coagulopathy in small animals. Warfarin itself has a short half-life and a fairly low toxicity in non-rodent species, so unless large or repeated doses are consumed clinical bleeding is rare. However, the second generation anticoagulant rodenticides are far more potent, with tendency to accumulate in the liver and a long half life (4-6 days) owing to high levels of plasma protein binding2, 3. These newer drugs are therefore more commonly implicated in cases of poisoning3, and it is possible for a domestic animal to acquire secondary poisoning by ingesting a killed rodent2. High plasma protein binding also means that the effects of anticoagulant rodenticides are potentiated by administration of other highly plasma protein bound drugs, and low plasma albumin levels. 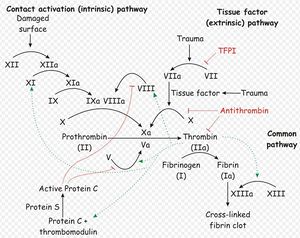 Normally, haemostastis is maintained by three key events3. Firstly, platelets are activated, adhere to endothelial connective tissue and aggregate to form a platelet plug. Next, substances are released that trigger coagulation and vasoconstriction. Finally, fibrinogen is polymerised to fibrin which reinforces the platelet plug. Some components of the coagulation and fibrin formation stages are dependent on vitamin K, and it is these which are influenced by anticoagulant rodenticide activity.

Two simultaneous cascades are activated to achieve coagulation: the intrinsic and extrinsic pathways. The intrinsic pathway is activated by contact with collagen due to blood vessel injury and involves the clotting factors XII, XI, IX and VIII. The extrinsic pathway is triggered by tissue injury and is effected via factor VII. These pathways progress independently before converging at the common pathway, which involves the factors X, V, II and I and ultimately results in the formation of fibrin from fibrinogen.

Within each of the three arms of the coagulation cascade, certain clotting factors are dependent on vitamin K for activity. These are factor VII, factor XI and factors II and X in the extrinsic, intrinsic and common pathways respectively. Vitamin K carboxylates these factors to their fuctional forms, and becomes oxidised itself in the process. Vitamin K is always required for the production of new II, VII, IX, and X in the liver and levels are tightly regulated. It is therefore essential that vitamin K is recycled after it is oxidised in the carboxylation reaction, and the enzyme vitamin K epoxide reductase is respsonsible for this.

Anticoagulant rodenticides competitively inhibit vitamin K epoxide reductase4, preventing the recycling of vitamin K and depriving the liver of the active, reduced form of the vitamin1-6. Activation of factors II, VII, IX and X ceases, but there is a quantity of these already in the circulation that are not affected. A time-lag therefore exists between ingestion of anticoagulant rodenticide and the clinical manifestation of toxicity (unchecked haemorrhage), while the supply of still-viable, vitamin K-dependent clotting factors reach the end of their life span. This delay is around 5 days in length3, and may mean that patients present late to veterinary practices after intoxication6.

Since factor VII has a half-life of only 6 hours, the extrinsic pathway is the first to be affected. This causes slight impairment of haemostasis giving a mild degree of haemorrhage, but the intrinsic pathway is still functional and is able to prevent the development of overt clinical signs. After around 14 hours, factor IX of the intrinsic pathway reaches the end of its life-span, and this pathway ceases to operate. Haemorrhage can then proceed unchecked, and clinical signs become obvious. Coumarin and indandione toxicity may also increase the fragility of blood vessels, exacerbating the problem by causing bleeding at sites that are not subject to trauma6.

Malabsorption syndromes and sterilisation of the gastrointestinal tract by prolonged antibiotic usage will also result in the depletion of vitamin K-dependent clotting factors7. In herbivores, fungi growing on poorly prepared hay or silage containing sweet vernal grass or sweet clover may break down natural coumarins in the plants to form dicoumarol and cause poisoning.

Ideally, a diagnosis of anticoagulant rodenticide toxicosis should be made based on a history of ingestion of the substance. Failing this, clinical signs, certain laboratory parameters and response to treatment will be suggestive of the condition.

As described above, the onset of clinical signs in anticoagulant rodenticide toxicosis is delayed for up to five days while vitamin K dependent factors become depleted, due to the gradual degradation of functional factors already in the circulation. When signs occur, they are related to defective haemostasis and unchecked haemorrhage although depression and anorexia may be seen before bleeding begins. Visible signs can include external haematomas, bruising, epistaxis, hyphaema, haematemesis, haemtotochezia, melaena, haematuria or excessive bleeding from sites of venupuncture or injury1-8. Lameness may also occur if there are haemorrhages into joints. Non-specific symptoms are also possible, related to internal bleeding. Such examples are weakness, ataxia, dyspnoea, abdominal swelling and pallor.

Routine haematology reveals an anaemia due to loss of whole blood. Because time is required for regeneration to begin, the anaemia may initially appear non-regenerative. Haemorrhage is also likely to give a reduction in total protein and/or indications of dehydration (e.g. increased urea and creatinine) on biochemistry. Secondary complications such as pre-renal azotaemia are possible.

Laboratory tests are unlikely to show abnormalities until 36-72 hours after exposure, due to the delay in onset of haemorrhagic signs. Prothrombin time (PT) is a measure of functionality of the extrinsic (and common) pathway, and because factor VII has the shortest half life and thus becomes depleted most rapidly, this parameter is generally the first to become prolonged. Partial thromboplastin time (PTT) and activated clotting time (ACT) are related to the function of the intrinsic and common pathways, and usually become prolonged by 48-72 hours post-ingestion when levels of factor IX are reduced. Platelet count and buccal mucosal bleeding time assess platelet function, and since only secondary haemostasis is affected by vitamin K epoxide reductase antagonism, these measures are usually within normal limits.

The 'proteins induced by vitamin K antagonism'(PIVKAs) are acarboxylated proteins that form as a result of anticoagulant rodenticide toxicity. PIVKAs are not normally detected in the circulation and are increased in the plasma of intoxicated animals. However, PIVKAs are rapidly cleared following adminstration of vitamin K, and so samples should be obtained before therapy is initiated.

It may also be possible to assay vitamin K epoxide and specific anticoagulant in the blood, but these tests are not normally necessary.

Pathologic findings commonly include free blood in the thorax, lungs and abdominal cavity7. Haemorrhage into the gastrointestinal tract, cranial vault and urinary tract may also be seen, as well as intramuscular and subcutaneous bleeding.

If ingestion of rodenticide occured in the past three hours, vomiting should be induced in an attempt to reduce absorption. If animals fail to vomit, stomach lavage may be indicated.

The treatment of anticoagulant rodenticide poisoning aims to correct the hypovolaemia and coagulopathy present. A whole blood or plasma tranfusion immediately provides vitamin K dependent clotting factors, helps to restore blood volume and, in the case of whole blood, supplements red blood cells1-9. This may need to be followed with larger volumes of crystalloids to compensate for large volumes of fluid loss. The specific treatment of anticoagulant rodenticide toxicosis is administration of vitamin K1. This is given as a subcutaneous loading dose at 5mg/kg, and is followed by oral or subcutaneous administration at 2.5-5mg/kg once daily, for 1-6 weeks. If given per os, providing a small amount of fat such as canned dog food aids absorption7, 8. Intravenous administration of vitamin K1 is contraindicated as anaphylactic reactions may occur. Treatment with the less expensive vitamin K3 is also contraindicated as it is not efficacious in the face of anticoagulant rodenticide toxicity. The duration of treatment depends on the anticoagulant as well as patient factors, and coagulation parameters should be monitored to detmine the progress being made.

Hypocoagulable patients are at risk of internal haemorrhage, so physical activity should be kept to minimum. Unnecessary surgical procedures and venupuncture should be avoided, although thoracocentesis may be required in the event of haemothorax7.

The prognosis for anticoagulant rodenticide toxicity is guarded, but improves if the patient survives the first 48 hours of acute coagulopathy7.