The Limousin is a continental beef breed and is the most popular beef breed in the UK. It originated in the Massif Central region of France.

Limousins have a relatively small head with a broad forehead and muzzle. The coat colour is golden red with a lighter colour on the inside of thighs, around eyes and at end of the tail. Limousin horns are yellow at the base and darken at the tips, but most cattle are dehorned. Limousin cattle may have black genetics, with a coat colour that changes toward black as the calf ages. They offer excellent conformation, growth rates and killing out percentage. They tend to have a slightly longer gestation than most cows, but are not renowned for problems with calving compared to other continental breeds.

The Charolais is a continental beef breed and is the second most popular beef breed in the UK. It originated in the Charolles region of France.

Charolais cattle have a creamy white to wheaten coat colour with a pink muzzle and pale hooves. They have a short, broad head with horns (usually dehorned) and heavily muscled loins and haunches. They have a good temperament and excellent conformation, growth rates and killing out percentage. However, they do produce large calves that can present a problem at calving time, especially if mated to heifers.

The Aberdeen Angus is native UK beef breed and is the third most popular beef breed in the UK. It originated in Aberdeenshire, Scotland.

The Aberdeen Angus breed is naturally polled with a distinctive black coat. The coat may have a red tinge but black is the dominant colour. Aberdeen Angus cattle are versatile, relatively hardy with long life span and can adapt to all weather conditions. They are known for their good temperament and longevity. They also have excellent conformation, growth rates and are renowned for producing lean tissue with marbling fat that is highly sought after by restaurateurs. 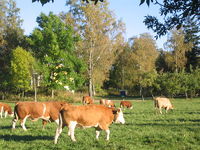 The Simmental is a continental beef breed and is the fourth most popular beef breed in the UK. It originated in the Simmen Valley of Switzerland.

Simmentals have a vivid gold-red coat colour with white. They have a white colour head and pigmentation around the eyes (often like an eye-patch). Simmentals can be horned or polled. They have a distinct heavy dewlap and are also heavily muscled. Simmentals are docile animals that have a good maternal instinct. They can adapt to a variety of conditions and have excellent conformation, growth rates and killing out percentage.

The Belgian Blue is a large sized breed with very prominent muscling. Belgian Blue are renowned for their “double muscling” on their shoulders, back, loin and rump. Their coat colours may vary from white, blue roan, black or black and white. Although Belgian Blues have a relatively short gestation period and low calf weight, the purebred animal has a very high incidence of dystocia, with a very high proportion (up to 90%) requiring caesarian delivery. This is primarily due to a combination of the large double-muscling in the purebred calf and the pelvic dimensions/conformation of the dam. In recent years breeders have become aware of the welfare concerns of the wider public and are trying to select for ease of calving. They have excellent conformation, growth rates and killing out percentage.

The weight of a mature bull is from 1,100+kg while the mature cow can weigh 850+kg. Belgian Blues may weigh over 1,300kg depending on muscle content.

The Hereford is a native UK beef breed and is the sixth most popular beef breed in the UK. It originated in the Border region of England and Wales.

Hereford cattle have a distinctive red coat and white face, crest, dewlap and underline. They have short, thick horns that curve downward; however, there is now a polled strain as well termed the Polled Hereford. Hereford cattle are generally smaller than continental breeds. However, they are known for their docility, ease of calving and for producing lean tissue with marbling fat throughout. Hereford cattle mature early and have a tendency to live longer than other breeds. They have good conformation, growth rates and killing-out percentage, although not as good as the continental breeds.

Herefords have declined in popularity in recent decades with the introduction of larger continental beef breeds, but Herefords were also traditionally used to cross with a Friesian cow to produce a Hereford x Friesian suckler cow. 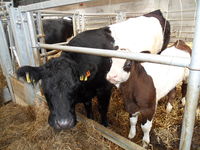 The Galloway is a upland native UK beef breed. It originated in the Galloway region of Scotland. It is one of the world’s longest established breeds of beef cattle.

The Blue Grey is an upland native UK beef breed. It is a cross between a whitebred Shorthorn bull and a black Galloway cow.

The Blue Greys are considered a hardy breed with a blue roan coat colour. They mature faster than other breeds.

The Luing is an upland, native UK beef breed from Scotland. It is originally derived by crossing Beef Shorthorn and Highland cattle.

The Luing breed is found mostly in the hill and upland areas due to their ability to calf in adverse weather conditions. They are naturally polled with good strong feet and bone structure. Cows are bred for extensive farming. They require little supplementary feeding. Cows are docile, long living and have a strong mothering instinct.