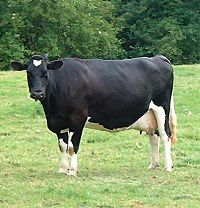 The Holstein Friesian is the most popular dairy breed worldwide, they originated from The Netherlands. The Holstein and Friesian are technically two different breeds. The Friesian was very popular throughout the 20th century, where although a dairy breed it was a bit stocky in appearance and was considered more dual purpose. Over the 1980s-2000s the Holstein breed has been integrated into dairy herds, where it is now the dominant breed due to its large size and extremely high yields. Most black and white dairy cows have little Friesian genetics nowadays, such that the breed society in the UK is no longer called Holstein Friesian, but simply Holstein UK. 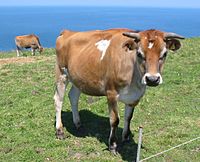 The Jersey most likely originated in Continental Europe and may share ancestry with the Guernsey and native breeds from Normandy and Brittany in France.

Jersey cattle are small cows (400-450kg), typically light brown in colour; however, this colour could range from grey to dull black (also known as Mulberry). They will always have a black nose bordered by a white muzzle. Jerseys also always have black hooves, which makes them less prone to lameness. They have high quality milk that is rich in colour, butterfat, protein, minerals and trace elements. Jerseys produce on average about 5,600 litres of milk with 5.4% butterfat and 3.8% protein. Milk from Jersey cows is often marketed as a niche product.

The Ayrshire dairy cow originated in the region of Scotland that bears its name.

Ayrshires are medium sized cows (500-600kg) and are considered hardier than the other dairy breeds. They are red and white in colour which vary in shade from very light to very dark mahogany. The colour markings vary from virtually all red to all white. The spots are usually very jagged at the edges and often small and scattered over the entire body of the cow. They are able to forage and rustle for themselves under adverse conditions and can adapt to all management systems. Ayrshire cattle have horns but they are usually dehorned nowadays. Ayrshires produce on average about 6,900 litres of milk with 4.1% butterfat and 3.3% protein.