The penis is the male copulatory organ. It is formed from three parts; two Corpora cavernosa, comprising of cavernous tissue and a connective tissue sheath the tunica albuginea, and the single Corpus Spongiosum which contains the urethra encased in a vascular tissue sleeve. There are two types of penis: the musculovascular and fibroelastic penis.

The corpus cavernosum is made up from the paired columns of cavernous tissue surrounded by connective tissue known as the crura of the penis or corpora cavernosa.

The corpus spongiosum is a vascular tissue sleeve surrounding the urethra. It commences at the bulb of the penis as an enlargement of the spongy tissue of the pelvic urethra. At the end of the penis the corpus spongiosum expands over the distal end of the corpus cavernosum to form the Glans penis, bringing the urethra to the extremity of the penis. There is a great variation in the morphology of the glans penis between species which often correspond to the female tract morphology. For example the boars “corkscrew” glans penis corresponds to the many interdigitating prominences of the sow’s cervix. The glans penis is highly populated with sensory nerves. 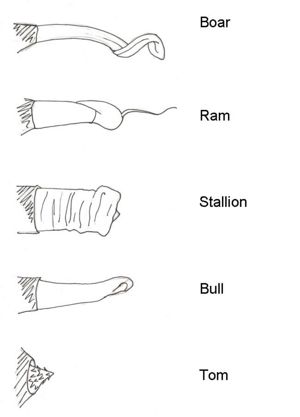 Muscles associated with the penis

The artery of the penis is a direct branch off the internal pudendal artery. It splits into three branches:

The prepuce covering the flaccid penis is supplied by anastamosis between the external pudendal artery and the artery of the penis.

Lymph from the penis and prepuce drains into the superficial inguinal lymph nodes.