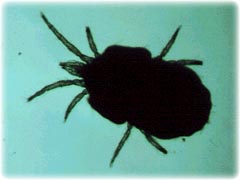 The life cycle of the snake mite Ophionyssus natricis (Camin, 1953) which is similar to other macronyssid and dermanyssid mites, can be completed in less than three weeks at 30ºC. The rate of maturation of the various stages is temperature dependent and one moult occurs between each stage.

A gravid female leaves the host and finds a dark, moist crevice and lays eggs that are developed to the blastula or early gastrula stage. The rate of development is temperature dependent. Most eggs hatch into larva at relative humidity of 85% and greater. Desiccation resulting in ineffective hatching is a major cause of egg mortality.

An eggs hatches into a soft-bodied larvae that does not move after leaving the egg. The larval stage is very sensitive to desiccation and usually stays in the region of hatching until it matures and moults which usually requires 18-24 hours at 25-30ºC. Improper moulting is a major cause of mortality and effective moulting requires a relative humidity of at least 75%.

The larva mounts to the protonymph stage, which stay in the humid hatching area until its exoskeleton becomes sclerotised. A host is actively located and feeding begins within 24 hours. Numbers of unfed protonymphs may be found on objects within the cage and will attach to the snake when they are disturbed. They quickly crawl under scales and lacerate the soft skin between scales with their chelicerae. They remain attached to one spot until fully engorged. The duration of feeding is largely dependent on ambient temperature. The rate of engorgement is temperature dependent and typically requires three to seven days of feeding at 25ºC. When near full engorgement the posterior region of the body can be seen protruding from under the scale. While feeding is necessary for maturation and moulting to deuteronymphs, protonymphs can endure periods of starvation of up to one month. When full of blood, the protonymph drops off the host, finds a dark, moist crevice and moults. Approximately 10-20% of the nymphs die due to improper moulting even at optimum temperatures and relative humidities.

The deuteronymph moults to the adult stage. Adults are sexually dimorphic and very active. Their life span is up to 40 days under favourable conditions. Both sexes will actively feed by telmophagy (compared to solenophagy) and use their well-developed chelicerae to lacerate the soft skin between scales. A blood meal is required for egg production but does not affect longevity. Mating takes place shortly after the mites reach adulthood. Upon locating a host the adult attaches under the scales.

Female adults are voracious feeders and can increase their body weight up by 1500% (from 0.05 mg to 0.75 mg) by feeding over a period of five to eight days. When near full engorgement the posterior region of the body can be seen protruding from under the scale. Fully engorged mites are frequently observed on the dorsolateral body before dropping from the host. Engorged females find a dark moist concealed area where they lay approximately 20 eggs over a five to 20 day period depending on the environmental temperature. Adult females will then feed again and reproduce two to three times at intervals of one to two weeks. A single female is capable of producing 60 to 80 eggs in her lifetime.

The eggs are about 300-400 µm in length and 200-300 µm in width. They are off-white to tan ovoid structures that darken at one pole. The eggs are visible to the unaided eye and do not change in size as they develop. Unfertilised eggs are somewhat smaller than fertilised eggs.

The larval stage is a small, white, fragile, non-feeding, six-legged mite (400 µm x 250 µm). The integument is poorly scleritised and bears numerous papillae that gives a cobblestone. The developing fourth leg of the later nymphal and adult stages may be observed as a crescent shaped structure under the lateral integument posterior to leg Ill.

The unfed protonymph is similar in size to the larva. The body is posteriorly tapered and there are four pairs of legs and well-developed chelicerae. The dorsal and ventral surfaces are partially covered with scleritised plates and a number of setae. Leg I is slightly shorter than leg IV and legs II and Ill are shorter again. The posterior three pairs of legs are used for locomotion. Pair 1 bears sensory receptors in the tarsal segments and may be waved in front of the body. The body of the fully engorged protonymph is ovoid in shape and is approximately twice as long as it is wide. Engorged male protonymphs average 530 by 275 µm whereas females average 688 by 360 µm.

The bodies of the deuteronymphs are approximately the same size as engorged protonymphs or unfed adults of the same sex and are typically dark red to black in colour. The dorsal and ventral integument lacks the scleritised plates found on protonymphs and adults and has a striated texture. The density of setae is markedly reduced in comparison to protonymphs and adults and the chelicerae are soft and underdeveloped in comparison to those of the protonymph and adult. The legs are longer than those of the protonymph with pair II the shortest.

Unfed adult males are ovoid with a posteriorly tapered body (500 µm x 200-250 µm). Legs I & IV are approximately 50 µm longer than II & III. The body is covered with scleritised plates and has a hairy appearance due to numerous setae. Engorged males are posteriorly ovoid and are wider (300-350 µm) than unfed males. The colour of the engorged male is dependent upon the amount of ingested erythrocytes and the degree of digestion.

Unfed adult females are ovoid (600 µm x 300-400 µm). Legs I and IV are approximately 100 µm longer than II and Ill. The body is covered by scleritised plates and has a hairy appearance due to numerous setae. Fully engorged females are posteriorly globose and may measure over 1300 µm in length. They are dark red or black in colour.