Trypanosomosis in equines is caused by trypanosome protozoans, of which there are five pathogenic to livestock. Most common are:

As with many other domestic livestock, tsetse-transmitted T. vivax, T. congolense and T. brucei can also affect equines in tsetse-infested areas. T. vivax can also be transmitted mechanically by biting flies, which extends its occurrence outside the tsetse belt.

Traditionally donkeys, but not horses, are found in some tsetse-infested areas, and horses can only be maintained in these areas with the use of trypanocidal drugs. The greater resistance of donkeys to tsetse-transmitted trypanosomosis is variable and may be due to donkeys being less attractive to these flies, having partial immunity to trypanosomes or other factors (Barrowman, 1991; Faye et al, 2001).

Tsetse-transmitted trypanosomosis occurs only in sub-Saharan Africa, affecting an area of 10,000,000 square kilometres. T. evansi is found in China, India, South-east Asia, North Africa, the Middle East, South America, Bulgaria and parts of the former USSR. T. equiperdum is reported in many countries in Asia, Africa, South America and south-easten Europe. In endemic areas, sero-prevalences are typically around 10%, but many of the affected equines will be asymptomatic. Mechanically transmitted T. vivax is present in South America. 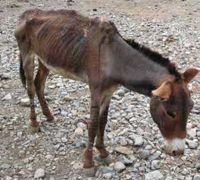 Clinical signs are not specific to trypanosomosis. Malnutrition, helminthiasis and babesiosis could give a similar clinical picture of emaciation as shown, and can also occur concurrently. Laboratory diagnosis is therefore recommended before treatment is instigated. (Image courtesy of The Donkey Sanctuary)

Infection with tsetse-transmitted trypanosomosis can be acute or chronic. Signs are variable and dependent on the strain of trypanosomes, the general health status, level of stress, work, pregnancy status and any concurrent diseases. Enlarged lymph nodes, corneal opacity and petechial haemorrhages of the mucous membranes are also commonly reported signs with trypanosomosis. T. brucei is reported as causing serious acute disease in donkeys, whereas T. congolense can cause chronic wasting disease, leading to anaemia and oedema. T. vivax usually leads to chronic and milder disease. Mixed infections are also possible, as reported in Zimbabwe, where a high proportion of donkeys were found to harbour T. brucei and T. congolense, a combination which would be considered fatal in the horse (Boyt et al, 1972).

Donkeys infected with T. evansi are more resistant to clinical signs than horses but may show the signs mentioned above. Paralysis of the hind legs may occur in chronic cases. Mules are said to be as susceptible as horses to T. evansi (Uilenberg, 1998) but other texts indicate that a milder chronic form of the disease tends to occur in the mule (Luckins, 1999).

Infections with T. equiperdum often produce no or variable signs in the donkey, especially when caused by African strains. In general, infections are mild to asymptomatic, oedema in the genitals is not obvious and skin plaques occur in only 10% of infected cases. However, anaemia is often present (Kaufmann, 1996). In the horse, classic signs for dourine have been divided into three stages:

Trypanosomiasis can present with persistent non-healing circular ulcers. A direct smear of the squeezed exudate from the lesion usually reveals large numbers of the parasites (usually T. brucei).

may detect as little as one third of cases

Drugs that have been used to treat equine trypanosomosis. (Image courtesy of The Donkey Sanctuary)

Some trypanocidal drugs can be used prophylactically but generally this is not common practice in donkeys. Traditional treatments are widely used in Africa and there is evidence that at least some of these products have some trypanocidal activity in vitro. However, as toxicity data is lacking, they should be used with caution, and on the basis of advice from local experts. Vector control can be used for controlling T. evansi and include:

Extensive research has looked at the control of tsetse fly in livestock (Uilenberg, 1998). Community vector control is effective but is often not sustainable without external support. The individual donkey keeper can reduce risk and severity of infection by:

Dourine has been successfully eradicated from many areas by testing and slaughter. Where this is not feasible, the presence of fences and prevention of indiscriminate breeding may control spread of the disease. If possible, breeding animals should be tested serologically as the sperm and vaginal discharge of T. equiperdum infected donkeys is very virulent and can be a source of infection to other donkeys and horses.