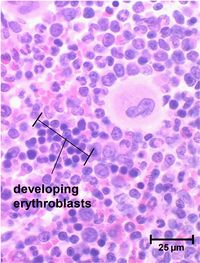 Erythrocytes contain no nucleus and are thus only produced from stem cells. During the fetal stage production is in both the liver and spleen however production is transferred to the bone marrow (red marrow) in the final stages of gestation. Initially erythropoiesis occurs in all bones, however after puberty production is limited to membranous bones (ribs, vertebrae, pelvic bones etc.) as the long bones contain adipose tissue in place of red marrow.

Erythrocyte stem cells contain no haemoglobin and it is only after several cell divisions that pro-erythrocyte haemoglobin starts to be generated within the cells. When the haemoglobin levels are at the correct concentration the nucleus reduces in size and is removed from cell. Cells at this stage still have ribosomes and other organelles and stain differently to mature erythrocytes; they are known as reticulocytes. After a few days these mature having reached a final haemoglobin concentration of 34%.

Reticulocytes and mature erythrocytes leave the bone marrow by ‘squeezing’ through the capillary endothelial cells. Precursors to these stages cannot change shape and therefore remain confined to the bone marrow.

Erythrocyte development is divided into several stages and at each stage the cell will divide several times. As bone marrow does not act as storage, all erythrocytes produced are immediately released into the circulation.

Stem cells give rise to precursors which eventually mature to form the fully developed erythrocyte. Initially, the multipotential myeloid stem cell (CFU-GEMM) differentiates into the erythroid CFU (CFU-E). This develops into the first erythrocyte precursor, the proerythroblast. The development process is controlled and influenced by a number of different factors including erythropoietin, IL-3, IL-4 and granulocyte-macrophage colony stimulating factor (GM-CSF).

The naming of the stages of the erythrocyte precursors varies.

Another classification of the stages is based upon the CFU-E being referred to as ‘rubri’. This system gives all developing blood cell lineages similar names. For example the first stage for erythrocytes is referred to as a [rubri]blast and the first stage for lymphocytes is called a [lympho]blast. The stages for the erythrocyte are rubriblast, prorubriblast, rubricyte and metarubricye.

The first erythrocyte precursor produced directly from the CFU-GEMM under the influence of erythropoietin. It has a large nucleus with free ribosomes in the cytoplasm giving the cytoplasm a basophilic appearance.

Smaller than the proerythroblast with a smaller nucleus but a more basophilic cytoplasm due to increased numbers of ribosomes in the cytoplasm. These ribosomes are involved in the production of haemoglobin.

This is the last precursor cell capable of mitosis and is smaller than the basophilic erythroblast. Its cytoplasm appears greyer due to the increased acidophilic staining caused by the presence of haemoglobin.

Also called a normoblast. It is incapable of cell division and is only slightly larger than a mature erythrocyte but it does contain a small dense nucleus.

Also called a reticulocyte and is formed when the nucleus is extruded from the normoblast. It still contains some ribosomes and therefore retains a slight basophilic stain. The clustering of the ribosomes forms a reticular network giving the name, reticulocyte. These cells can carry oxygen and enter the blood stream and are found in low concentrations in normal blood.

Commonly called the red blood cell. It is the final product of erythropoiesis and is released from the bone marrow into circulation.

Iron is found within each haem component of haemoglobin and binds oxygen.

Folic acid and vitamin B12

Production of erythrocytes is regulated by erythropoietin (EPO) which is produced in the yolk sac, liver and kidney from embryonic life until early neonatal life. In the adult it is produced only in the kidneys. Erythropoietin is a glycoprotein hormone and is controled by a negative feedback mechanism. Normal levels are low with sufficient amounts to maintain a basal level of new erythrocyte production. If blood oxygen concentration falls, the release of erythropoietin rises.

EPO is transported from kidneys to bone marrow where it acts upon receptors on the CFU-E’s and causes differentiation into erythrocyte precursors. It also increases the rate of division and maturation of developing erythrocyte precursors by increasing the rate of gene transcription. Thus it is not the number of erythrocytes but the oxygen concentration that controls erythrocyte numbers. EPO release can be affected by any form of renal pathology. Inflammatory induced release of interleukins reduces the secretion of erythropoietin.

The mechanism of oxygen concentration detection is via HIF-1 (hypoxia inducible factor 1) which is a transcription activator that is oxygen sensitive.