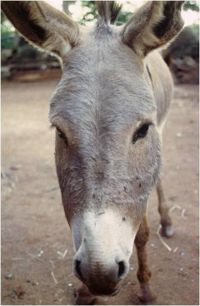 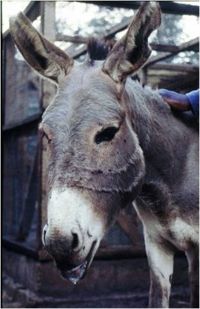 AHS is a non-contagious arthropod-borne disease of equidae. The causal agent is an orbivirus existing in nine serotypes. The occurrence of AHS is both cyclical and seasonal and dependent on the vector, usually Culicoides. Equine encephalosis, caused by a related orbivirus, follows a similar distribution and epidemiology to African Horse Sickness and can present with similar signs.

The last outbreaks in Europe were between 1987 and 1990 in Portugal and Spain. In Portugal, donkeys comprised over 10% of the equidae that died or were slaughtered as a result of the disease (Portas et al., 1999). Outbreaks in Southern Africa are regularly reported to the OIE.

Horses are the most susceptible to the virus, followed by mules, European donkeys and then African donkeys. Four forms are classically distinguished in the horse:

Donkeys, particularly those in South Africa, are often described as being relatively resistant to the disease, although clinical cases have been reported in Egypt, Algeria and in European and Asian donkeys (Bourdin, 1972; Mellor, 1994; Anon, 1998). Studies show that infection of donkeys with a virulent serotype 4 strain did not produce pyrexia or any other clinical signs. Pathological changes were limited to increased fluid accumulation in the serosa and both petechial and ecchymotic haemorrhages on the left hepatic ligament (Hamblin et al., 1998).

In 1993 an outbreak occurred in a riding establishment in Botswana, affecting twenty horses and six donkeys. Eight of the twenty horses succumbed to the infection within five days of the initial outbreak, whereas the donkeys present on the premises exhibited mild pyrexia only (A. Trawford, personal communication).

Donkeys have been implicated in the spread of AHS, but their specific role in its epidemiology is poorly defined. They are unlikely to be long-term reservoirs of the African horse sickness virus (AHSV). However, they may aid spread of the virus by acting as ‘silent reservoirs’, possibly even when they have been vaccinated (Hamblin et al., 1998).

The distribution of AHSV is limited by the presence of the vector. Global warming may increase the range of the vector and hence alter locations where AHS may be found. It is unlikely that Culicodes imicola (a vector of AHS) will spread to the UK. However, other more local species of this insect may take up the ‘baton’ of infection and spread it northwards (Wittmann & Baylis, 2000). The outbreak of AHS in Spain in 1987 was due to an infected zebra imported from Namibia (Lubroth, 1988). Zebras have also been implicated as a possible reservoir of the virus between epizootics, but other animals may also fulfil this role and may present a risk if imported to the UK. AHS virus is closely related to Bluetongue virus and is spread by the same vector. The rapid spread of Bluetongue in 2006 in ruminants in parts of mainland Europe has highlighted the need for awareness of the potential risk of AHS particularly from donkeys which may show little signs of the disease. The virus was recorded in the UK for the first time in 2007.

Clinical signs are seen in very few cases in donkeys and only in certain areas. The signs are usually non-specific.