Parathyroid hormone (PTH) and ionised calcium (iCa) measurements are the mainstay of calcium investigations and their combined measurement should be considered in both hypocalcaemic and hypercalcaemic situations where the cause is not immediately obvious. Total calcium measurement may not provide a true reflection of calcium status in all cases. This is particularly so in animals with compromised renal function. Sample preparation is critical for the accurate analysis of PTH and ionised calcium: separated EDTA plasma shipped frozen for PTH and separated serum for ionised calcium (see sample preparation later in the section. The combination of iCa and PTH measurement usually permits differentiation between the four main categories of calcium regulation disorders: 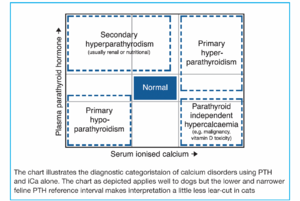 *As the name suggests, there is currently limited understanding of feline idiopathic hypercalcaemia. In some studies there is a suggested association with urinary acidifying diets. In others, calcium oxalate crystalluria has been reported and some amelioration achieved by a change to high fibre diets. Some authors believe the condition to be relatively benign, while others believe that the condition promotes the onset of renal dysfunction. Low dose glucocorticoids have been suggested as a therapy if there is concern about progressive disease.

Two forms of vitamin D are measurable in veterinary serum samples: 25-hydroxyvitamin D (25-OHD) and 1,25-dihydroxyvitamin D (calcitriol). 25-OHD is produced by the liver and its concentration parallels that of available vitamin D that may be dietary in origin (cholecalciferol (D3), ergocalciferol (D2)) or produced in the skin of certain animals under the influence of UV light. Because the enzymatic hydroxylation of vitamin D in the liver depends almost entirely on the availability of the substrate, this test is an excellent marker of overall Vitamin D status. It can be used to diagnose both conditions of vitamin excess and deficiency, therefore it is valuable in the investigation of both hyper- and hypocalcaemic disorders. 25-OHD is also the analyte of choice in verifying adequacy of UV light exposure in reptilian species. Other situations where abnormal 25-OHD results may be encountered include dietary deficiencies, malabsorption syndromes (PLE, EPI) and calciferol rodenticide toxicities.

Calcitriol is produced by renal tubular cells as a result of enzymatic action (1α-hydroxylase) on 25-OHD substrate. The rate of this process is controlled by PTH concentrations (increasing PTH causes increased 1α-hydroxylase activity). Calcitriol is the most biologically potent form of vitamin D and its main activities are directed at increasing serum calcium concentrations, including increased intestinal uptake of calcium. The failure of renal tubular cells to generate calcitriol in renal disease is one of the contributing mechanisms to renal secondary hyperparathyroidism (and ‘rubber jaw’). The measurement of calcitriol may be of some value in understanding renal tubular function and the effects of PTH on the vitamin D system.

In dogs, cats and many veterinary species, very little passive intestinal absorption of calcium occurs. Intestinal calcium absorption is almost exclusively mediated by vitamin D. The situation is different in horses, rabbits (and the hippopotamus), in which there is significantly more passive absorption of calcium and calcium status is controlled more by renal excretion. In these species, the effects of renal disease on calcium status will be different than in most common mammalian species.

The addition of aprotinin is essential. The aprotinin EDTA sample tube supplied with the freezer pack MUST be used to collect the sample

Submitted sample should be whole clotted blood or separated serum. EDTA plasma is not acceptable as the EDTA would chelate all the available calcium making it unavailable for analysis.

The laboratory will apply a correction formula to take account of the change in pH that will have occurred due to exposure to air. This will result in an estimated iCa at a standardised pH (7.4).