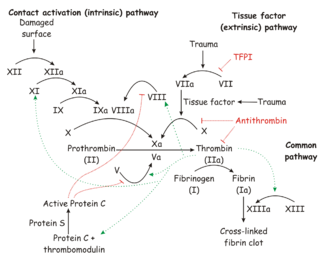 This condition is seen in the dog, most frequently in Scottish Terriers and Chesapeake Bay Retrievers. It has become more prevalent recently in Dobermanns, Setters and German Shepherd dogs. A similar disease has been recorded in the pig.

Von Willebrand's Disease is an inherited autosomal recessive trait. It is incompletely dominant, so there is variable expression. It can present as purpura and/or prolonged bleeding times. Pathologically, there is reduced platelet adhesiveness and low Factor XIII levels.

Factor IV is calcium, which is necessary at several stages of coagulation. Hypocalcaemia at a level sufficient to impair haemostasis is incompatible with life.

Factor VII is Proconvertin; deficiencies of factor VII do not appear to impair the formation of the haemostatic plug and any resulting bleeding defect is normally mild. Newborn pups have a very low plasma level of Factor VII and spontaneous and inherited deficiencies have been reported in Beagle colonies. Deficiencies may also occur associated with liver disease and in dicoumarol poisoning.

Factor VIII is known as antihaemophilic factor (AHF); a deficiency of this factor causes haemophilia A. In haemophilic conditions:

Haemophilia is reported in horses and in around 20 breeds of dogs - it is known to be a sex-linked recessive condition associated with the X chromosome which affects only males.

The severity of the disease correlates with the Factor VIII levels. Haematomas and haemarthrosis are commonly seen as a result of this condition.

Factor IX is 'Christmas Factor' and deficiency causes haemophilia B. This occurs presominantly in Cairn Terriers and Black and Tan Hounds. It is similar to Factor VIII deficiency; a sex-linked (X chromosome) recessive that results in a deficient haemostatic plug.

Factor XII is known as 'Hageman Factor'; low plasma levels had been reported in cats and horses.