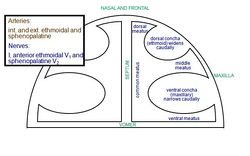 Dorsal: The maxilla and the palatine processes of the incisive bones.

Nasal conchae are turbinate bones that project into the nasal cavity. Their purpose is to increase the respiratory surface area, and to create turbulence within the passing air. This helps to filtrate and warm or cool the air that passes through. They are cartilagenous or ossified scrolls that are covered with mucous membrane, under which is a layer of anastomosing blood vessels. There are dorsal and ventral conchae, the dorsal concha extending further into the nasal cavity. The conchae divide the nasal cavity into meatuses, which branch out from a common nasal meatus which is adjacent to the nasal septum. There are three nasal meatuses which branch from the common nasal meatus: dorsal, middle and ventral:

Dorsal nasal meatus: The passage between the roof of the nasal cavity and the dorsal nasal concha.

Middle nasal meatus: Between the dorsal and ventral conchae, and communicates with the paranasal sinuses.

Ventral nasal meatus: The main pathway for airflow leading to the pharynx, and is positioned between the ventral nasal concha and the floor of the nasal cavity.

Common nasal meatus: The longitudinal space on either side of the nasal septum.

There is a dense network of blood vessels supplying the nasal mucosa. The sphenopalatine artery supplies the nasal cavity. The lateral and dorsal nasal arteries, which are branches of the facial artery, itself a branch of the external carotid artery, supply the nose. The infraorbital artery also supplies the nose.

Sensory innervation is provided by the olfactory nerve (CN I). 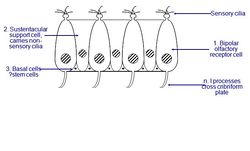 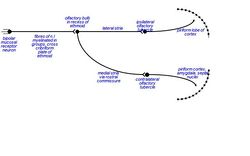