The forebrain (proencephalon) is the largest part of the brain, most of which is cerebrum. Other important structures found in the forebrain include the thalamus , the hypothalamus and the limbic system. The cerebrum is divided into two cerebral hemispheres connected by a mass of white matter known as the corpus callosum. Each hemisphere is split into four lobes; the frontal, parietal, occipital and temporal lobes. The surface of each hemisphere is made up of grey matter known as the cerebral cortex and is folded to increase the surface area available within the skull. The cortex has roles within perception, memory and all higher thought processes. Inside the cortex is the white matter, within which are a number of nuclei (grey matter), known as the basal nuclei. The basal nuclei receive information from the cortex to regulate skeletal movement and other higher motor functions.

The thalamus functions to relay sensory information to the cerebral cortex and the hypothalamus, regulating visceral functions including temperature, reproductive functions, eating, sleeping and the display of emotion. The limbic system describes a collection of structures within the forebrain, including the amygdala and hippocampus, also known as the 'emotional brain'. It is important in the formation of memories and in making decisions and learning.

The thalamus is comprised of two oval shaped structures, connected by the interthalamic adhesion. The thalamus has many functions. It is involved in processing and relaying sensory information selectively to various parts of the cerebral cortex. All senses from lower centres, including auditory, somatic, visceral, gustatory and visual systems, have input to the thalamus before being relayed to the appropriate areas within the cerebral cortex. The thalamus plays a major role in regulating arousal, levels of consciousness and levels of activity.

The hypothalamus is located on the floor of the diencephalon, beneath the thalamus. It communicates with the cerebral cortex, thalamus, pituitary gland and other areas of the brain via the infundibular stalk. The function of the hypothalamus is mainly related to the overall regulation of the Endocrine System. It also controls and integrates the autonomic nervous system, therefore controlling heart rate, blood pressure, body temperature and gastrointestinal secretions. The hypothalamus is closely related to the pituitary gland, controlling a large proportion of the activity going to it. For a more detailed analysis of the function of this part of the brain, please use the link: Hypothalamus Anatomy and Physiology.

The function of the pituitary is mainly related to the production of hormones as part of the Endocrine System. For further information on the pituitary gland please use this link: Equine Pituitary Gland.

This cerebrum is the largest part of the brain, divided by the median fissure into two cerebral hemispheres. The cerebral hemispheres are connected by the corpus callosum. The outer layers of the cerebrum are made up of grey matter. Grey matter is formed by neurons and their unmyelinated fibres. The white matter below the grey matter of the cortex is formed predominantly by myelinated axons (myelin is white in appearance). The surface of the cerebral cortex is folded, the numerous folds are known as gyri which greatly increase the surface area. Grooves between these gyri are known as sulci; more than two thirds of the surface is within sulci. The cerebral cortex is connected to structures such as the thalamus and the basal ganglia, sending information to them along efferent connections and receiving information from them via afferent connections. Most sensory information is routed to the cerebral cortex via the thalamus. The cortex is commonly described as comprising three parts; sensory, motor and association areas.

The sensory areas receive and process information from the senses. Inputs from the thalamus are called primary sensory areas. Vision, hearing, and touch are processed by the primary visual cortex, primary auditory cortex and primary somatosensory cortex respectively. The two hemispheres of the cerebral cortex receive information from the opposite (contralateral) side of the body. There are a number of anatomical areas of the brain responsible for organising this sensory information. The parietal lobe is located within the dorsocaudal aspect of the cortex. The temporal lobes are located laterally and the occipital lobes are located in the caudal most aspect of the cortex. The frontal lobe or prefrontal association complex is involved in planning actions and movement.

The motor cortex areas of the brain are located in both hemispheres of the cortex and are shaped like a pair of headphones stretching from ear to ear. The motor areas are related to controlling voluntary movements, especially fine movements. There are two main types of connection between the motor cortex and motor neurones found in the ventral horn of the spinal cord; the Pyramidal tracts and the Extrapyramidal tracts.

The Limbic system is made up of parts of the brain bordering the corpus collosum. The Limbic system contains areas of cerebral cortex, the cingulate gyrus (dorsally), the parahippocampus gyrus (ventrally), the amygdala, parts of the Hypothalamus Anatomy and Physiology (mamillary body) and the hippocampus. The limbic system is principally responsible for emotions and the various types of emotion can affect the activity of the Autonomic Nervous System, facilitated by the hypothalamus.

The olfactory bulb is responsible for olfaction and the bulb itself is located within the rostral forebrain area, supported by the cribiform plate and the ethmoid bone. The olfactory nerves are connected directly to the limbic system. As a result, olfaction plays a central role and is particularly important in regulating/stimulating sexual behaviour.

The midbrain or mesencephalon represents the connection between the brainstem and the higher centres of the brain and is involved in most body systems including sleep/consciousness, vision, hearing and temperature regulation.

The midbrain has a stratified structure comprising various layers including the tectum, tegmentum and cerebral peduncle. These structures are found in a dorsoventral sequence. The tectum lies dorsally to the cerebral aqueduct and it has four major rounded surface swellings; colliculi (see below). The tegmentum is the core of the midbrain and a large proportion of it is made up by the reticular formation.

The major cranial nerve nuclei within the midbrain are the mesencephalic nuclei of the trigeminal nerves (V), the trochlear nuclei (IV), the principle and parasympathetic oculomotor nuclei (Cranial Nerve III), the 'red nuclei' (so named due to its pronounced vascularity) and the periaqueductal grey nuclei. The periaqueductal grey nucleus is a core of grey nervous tissue located adjacent to the cerebral aqueduct. The oculomotor nerve emerges from the mid brain rostral to the pons.

Within the lumen of the midbrain lies the cerebral aqueduct, which acts as a simple passage between the spinal cord and the third and fourth ventricles.

These are visible on the ventral surface of the mid brain and consist of fibre tracts that are in passage between the telencephalon and the brainstem. The oculomotor nerves (see above) also emerge in this region of the mid brain, directly rostral to the pons. 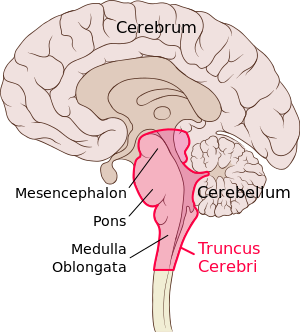 The hind brain is also called the rhombencephalon, it provides the connection between the spinal cord and the rest of the brain. The hindbrain contains many vital structures including the Medulla Oblongata, the Pons (the link between the cerebellum, forebrain and mid-brain) and the majority of the cranial nerves III to XII. In general the brainstem governs essential functions that are carried out sub-consciously via reflexes. As well as containing numerous cranial nerves , the hindbrain also contains many 'extra-pyramidal pathways' which include the reticular formation, the olivary nucleus and the pontine nuclei. Nuclei within the hindbrain are also responsible for the reflexive control of posture and eye movement.

The pons can be found in the metencephalon region of the hindbrain. The pons is able to exert some influence on respiratory movements and can also influence many digestive processes.

Cranial nerves III to XII exit from the brain stem and act to innervate parts of the head, neck, viscera and the thoracic and abdominal cavities. Although most of these nerves contain both sensory and motor fibres, the sensory fibres all have their cell bodies in ganglia outside the brainstem.

The location of the cerebellum. Image courtesy of BioMed Archive

The cerebellum is located in the caudal part of the cranial cavity and is caudal to the tentorium cerebelli but dorsal to the fourth ventricle. Its gross structure is made up of a central 'vermis' surrounded by two lateral hemispheres. It is attached to the brain stem via three pairs of peduncles; a rostral pair to the midbrain, a middle pair to the pons and a caudal pair to the medulla oblongata. Its internal structure is composed of a cerebellar cortex which is made up of fissures on the surface that divide into lobules and then further sub divide into folia or leaves. There are white matter fibres running to and from this cortex, also called arbor vitae. Within the cerebellum there are various nuclei including the dentate, interpositus and the fastigial.

The generalised function of the cerebellum is to receive information regarding any movement in progress or any intended movement via inputs from the muscles, vestibular system and motor centres of the pyramidal and extrapyramidal systems. The most important function of the cerebellum is to minimise the difference between the intended and the actual movements. The cerebellum then projects corrections regarding these movements to all motor centres of the brain via feedback circuits between the pyramidal and extrapyramidal systems. It should be noted that the cerebellum cannot initiate movement.