For the appropriate development of the CNS a number of important basic requirements must be achieved. For example, the appropriate haemopoeitic cells must differentiate into specific cells (either neurons or glia) and any axons must extend to appropriate positions in order to form synapses. Development of the CNS is a complex process and complete coordination is required to facilitate the correct procedure of cell differentiation and the establishment of the correct intracellular connections. A range of neurotrophic factors regulate these interactions including FGF, nerve growth factor, laminin, brain derived neurotrophic factor and neurotrophin 3.

The embryological origin of the CNS is from the neural ectoderm which is a ridge of tissue in the centre of the early embryo once the basic blastocyst has undergone a degree of differentiation. The neural ectoderm is formed via the thickening of the ectoderm and its interaction with underlying basic neural tissues including the notochord. This interaction results in the formation of the neural plate, termed the neuroectoderm. Below is a diagram of the completed initial stages of development to provide an indication of the anatomy of the development process.

Further along into spinal development, each vertebral body develops three centres of ossification which are separated by cartilage growth plates. Each half of the two vertebral arches that surround the developing spinal cord (neural tube) have their own ossification centre facilitating the development of vertebral processes, ribs and other bone structures related to the LPM including the scapula and pelvis.


Development of the Brain 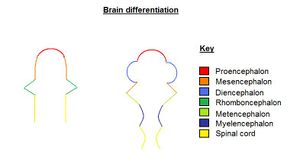 After these initial expansions, a series of further developments occurs to form some of the major landmarks in the brain. The mesencephalon narrows prior to the proencephalon resulting in the formation of the 'Foramen of Munro' and the 'Cerebral Aqueduct'. The proencephalon develops two further pouches in the cranial lateral aspect which are the foundations of the 'Lateral Ventricles' and the 'Third Ventricle'. The rhombencephalon expansion forms the 'Fourth Ventricle' and the 'Central Canal'.

The development of the brain continues with the forebrain out-pouchings developing into hemispheres and growing dorsolaterally, forming the telencephalon. These hemispheres grow over the newly formed diencephalon, mesencephalon and back to the metencephalon. During this stage other developmental landmarks are developed including the Cepahlic flexure, Pontine flexure, Cervical flexure and the myelencephalon. An out-pouching for the cerebellum is also present at this stage of development, together with a choroid plexus (for the production of CSF) and defined lateral ventricles.

In the later stages of development, the brain develops a central sulcus with defined cerebral hemispheres. The telencephalon has gyri and sulci. There is also a defined diencephalon, mid-brain, pons, cerebellum and medulla oblongata. The lumen of the neural tube remains patent within the spinal cord as a narrow central canal.

Formation of the Eyes

The eyes are formed initially from expansion vesicles (called Optic Vesicles) from the lateral ventricles. The outer portion of these vesicles then invaginates resulting in the formation of an optic cup and optic stalk.

Therefore in neonates CSF taps must be caudal to the conus medullaris to avoid damaging the spinal cord.

An important element to the development of the CNS is the development and regulation of orientation within the embryo, i.e. which part is cranial, caudal, lateral etc. Within the neural tube this is controlled via HOX (Homeobox) transcription factors which ensure there is an orientation between rostral and caudal. Two HOX genes are expressed resulting in boundaries within the tissue that express that particular gene. One HOX gene is expressed rostrally and the other along the length of the spinal cord. This ensures only appropriate neural development takes place for the given location and orientation. 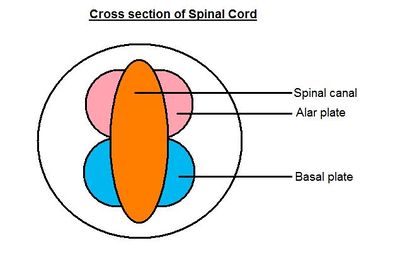 Within the brain and the spinal cord the fundamental organisation of the neurons is into 'columns' or groupings of cells within both the sensory and motor regions of the brain and within the grey matter of the spinal cord. Groups of neurons with similar functions are able to form 'nuclei'. Cranial nerve nuclei can include both motor and sensory neurons and are able to undertake a wide variety of functions and tasks. Cranial nerves can also convey fibres from multiple cranial nerve nuclei. Within the spinal cord specific columns of neurones, or 'spinal tracts' convey specific information to high centres in the brain.