The keratin in the epidermis, when cornified and thickened, is referred to as horn. Horn is particulary resistant to mechanical and chemical damage. The dermis of horn gives the structures their 3-D structure and shape. Cattle, some sheep, goats and antelope posess horns and these are permanent organs. Breeds without horns are termed polled breeds. Deer posess antlers, which are temporary organs that develop during the rutting season and are then shed.

Horns have a central, conical bony core or cornual process that grows out from the frontal bone of the skull. After 6 months of age, the bone becomes hollow and the space within it is continuous with the frontal sinuses. The surface of the bone is ridged and porous and is covered with papillated dermis that is continuous with the periosteum and epidermis which keratinises and forms the protective covering of the horn. The substance of the horn is similar to that of the hoof and is a mixture of tubules and intertubular horn. The new horn produced at the base is soft and often transparent and resembles the periople of the hoof, giving the horn a glossy appearance. 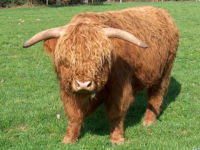 Horns are commonly observed in Highland cattle, as pictured here

In the neonate, the bone portion is very small, with a thin dermal and epidermal covering. Removal of this covering will prevent the horn from growing and thus remove the requirement for disbudding later in life.

If the skin covering the horn bud is not removed, the horn will continue to grow throughout the animal's life from the base, apically. Growth zones are visible with differing thickness of the keratin layer, relating to the nutritional status of the animal at that time.

The dermis of the horn is supplied by the cornual nerve, which is a branch of the maxillary nerve (CN V). This nerve is often blocked to provide local anaesthesia in the disbudding or de-horning process.

The primary function of horns is to convey social hierarchy. The larger the horns, the higher up the social group the animal is. They also have a thermoregulatory roll in cattle and goats. When the ambient temperature increases, the blood flow through the dermis of the horn also increases, thus facilitating heat loss through radiation from the horn surface.

Horns may be a source of problem for animals, including avulsions and fractures. The usual management practice involves debudding and dehorning procedures for horned animals or selection of polled animals as they are easier to handle and manage. They also require less space in housing and transport along with many other benefits.

Antlers are the usually large and complex horn-like appendages of most deer species, mostly present in males only, however, for some species such as caribou, are present in both sexes. They consist of bony outgrowths from the skull with no covering of keratin as is found in true horns. Each antler grows from an attachment point on the skull called a pedicle. While an antler is growing it is covered with highly vascular skin called velvet, which supplies oxygen and nutrients to the growing bone; once the antler has achieved its proper size, the velvet is lost and the antler's bone dies. This dead bone structure is the mature antler. Antlers shed after each mating season. 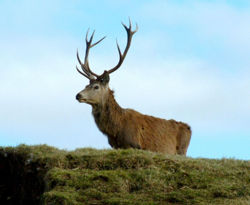 The Antlers of a mature red deer, common to Scotland

As with horns, the primary function of antlers is to establish social hierarchy. The larger males will be more successful in securing a mate and passing on their genes to future generations.

Antlers also appear to act as large hearing aids. This effect was discovered by researchers George and Peter Bubenik and the findings were published in the European Journal of Wildlife in March 2008. Moose with antlers have far more sensitive hearing than moose without. The pair then studied trophy antlers with an artificial ear, confirming the discovery of the effects on hearing by acting as a parabolic reflector.