Origin of the epidermis 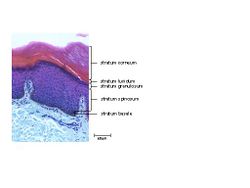 The epidermis is a stratified squamous epithelium and is composed of 4 cell layers anchored to a basal lamina of connective tissue. Keratinocytes migrate through the epidermis from the basal layer. This migration begins in the stratum basale, then moves up through the stratum spinosum, stratum granulosum and the stratum corneum.

The deepest layer of the epidermis is the stratum basale. It consists of a single layer of columnar epithelium which is adhered to the basal lamina. Nutrition is supplied from the underlying capillaries of the dermis. Migration of cells towards the surface begins here.

External to the stratum spinosum, lies the stratum granulosum. Granular cells are thin, flattened keratinocytes with variably prominent keratohyaline granules. At its outer surface, the stratum granulosum secretes oragnelles called lamellar bodies, which are composed of lipid and enzymes which fuse with the plasma membrane and help to form the water concentration gradient that leads to transepidermal water loss.

The outer layer, stratum corneum, consists of anucleate, thin cells filled with keratin filaments and proteins that form a cell envelope resistant to solvents and enzymes; there is also a permeability barrier to water and ions. The cells of the stratum corneum are embedded in a lipid-rich matrix which helps to hold the cells together, while the desmosomes that were present in lower layers have disappeared. For the stratum corneum to maintain a constant thickness, there is a constant turnover of exfoliated corneocytes, being replaced by new corneocytes. Enzymes in the lamellar bodies from the stratum granulosum help to break down the intercellular lipid 'glue' that holds the cells in place and there is also some degradation of desmosomes.

Cells of the Epidermis

These are dentritic cells derived from bone marrow. They act as antigen presenting cells in the epidermis as part of the mononuclear phagocyte immune system. Langerhans' cells express MHC I and II molecules and immunoglubulin Fc receptors and are a key feature of delayed hypersensitivity responses.

These are also dentritic cells and are derived from the neural crest. They are immersed in the epidermis where they form close contact with a defined number of keratinocytes - an epidermal-melanin unit. Melanin is composed of 2 types: eumelanin which is black-brown and phaeomelanin which is reddish-brown. Melanocytes produce pigment in melanosome structures which are membrane-bound structures involved in the transfer of pigment to keratinocytes. An important function of melanin is UV protection and absence of pigment confers increased sensitivity to UV damage.

These are part of the sensory apparatus of the skin and are located within the stratum basale of the epidermis where they act as slow-adapting mechanoreceptors. They are usually closely associated with the afferent myelinated nerve fibres, arranged in a plate-like structure with the base of the Merkel cell, together forming a Merkel's corpuscle.

The epidermis interfaces with the underlying dermis at the basement membrane zone (BMZ). The binding includes anchoring junctions called hemidesmosomes and focal adhesions. The former comprise extra cellular matrix (ECM) proteins such as laminin-5 and collagen type IV molecules, which form the lamina densa part of the BMZ, while the lamina lucida is composed of Collagen type V. Collagen type VII is important in forming anchoring fibrils between the dermis and the basal lamina.

Rete ridges are epidermal projections into the dermis in areas of mechanical loading such as the nasal planum and footpads.

The dermis consists of dense fibrous tissue composed of collagen type I, III and V, with some elastin fibres and provides a supporting mattress for the carriage of blood vessels, lymphatic vessels, nerves and sensory receptors, hair follicles, sebaceous and sweat glands, with circulating white cells. 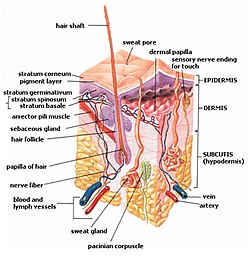 A diagram of a section through typical skin

Sweat is considered to be the product of apoptosis releasing cell contents into the gland lumen, together with secretion where exocytosis, microapocrine blebbing, transcellular and perhaps paracellular processes involved in varying degrees. Sweat is composed of secretions and cellular debris and includes inorganic ions, water, immunoglobulins, amino acids and waste products including urea and lactic acid. Equine sweat is rich in proteins including glycoproteins, albumin and gammaglobulins, which cause the sweat to froth and the horse is said to "lather up".

Sweat is degraded by bacteria leading to odour. Dogs and cats produce very little sweat and use panting to lower body temperature.

These are greatly modified, enlarged sweat glands and are present in both male and female animals. Depending on species, they extend from the axillae to the groin, associated with teats and a complex array of sinuses and ducts. Age, pregnancy and endocrine factors have an important role in determining glandular activity.

One or more sebaceous glands surround each hair follicle at a point about 1/3 of its length beneath the skin's surface. Each gland is composed of numerous acini attached to a common excretory duct through which they discharge their secretions (sebum) onto the hair shaft and epidermis. In the skin and eyelids such glands release the cell contents together with secretory products with holocrine secretion. This secretion involves apoptosis in which the secretory products and cell debris are released into the gland lumen. The secretory products vary from species to species and include various fatty acids, diglycerides, cholesterol, diesters, wax esters and giant-ring lactones.

The function of sebum is that of an emolient of the hair and skin, preventing excessive dryness. It may combine with sweat to form an emulsion within the stratum corneum and a form of cement around the hair pores preventing bacterial invasion of the epidermis. Sebum is also released from the glands during piloerection, as the action of the arrector pili muscle squeezes the gland as it raises the hair.

In sheep, sebum is often referred to as "lanolin". This is the cause of many skin allergies in humans.

Hepatoid sebaceous glands restricted to the perineum, dorsal tail and prepuce, they may have an endocrine and/or pheromone function. They empty into special sweat glands.

Large glands in the lip region of cats and some rodents; presumed to have a territory marking role. Circumoral glands are enlarged integumentary glands bordering on the mucocutaneous junctions of the mouth or oral margins associated with greeting and related behaviours, especially in scuiriomorph rodents.

Rabbits have scent glands on the chin which are used to mark territory by excreting droplets onto structures in the environment. Male rabbits scent-mark more intensively than female rabbits, and dominant individuals more than subdominant animals. This is correlated with larger scent glands in dominant males.

Sexually-related scent glands prominent in ungulates. They are located at the base of the udders to allow offspring to locate the teats of their mother.

Rabbits have pocket-like inguinal glands lateral to the genital openings. They are used to mark kits and cage surfaces and may contain dried yellow-brown sebaceous material. Does will attack young which have not been scent-marked, even if they are in the same breeding group. 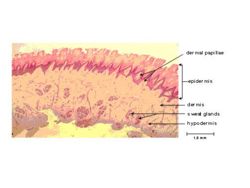 Cats and Dogs have a digitigrade stance with digital, metacarpal and metatarsal pads in contact with the ground. A carpal pad is also present, but seems to be superfluous.

Pads are covered with a very thickened epidermis with no hair follicles. They are hyperpigmented and have atrichial sweat glands opening to the surface under the influence of epinephrine.

There is little dermis and the hypodermis is composed of collagenous and elastic fibres mixed with adipose tissue to form a digital cushion that provides protection from mechanical impact.

The covering of the nose is very thickened with rete ridges providing anchoring. The surface has a cobblestone appearance in dogs and cats. Hair and sebaceous glands are absent, atrichial glands are present. 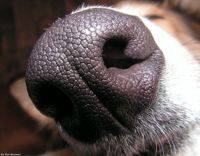 The cobblestone appearance of the nose of the Dog. Courtesy of Piotr Grzywocz

Claws have a variety of functions including locomotion, climbing, fighting and hunting. They are composed of a coronary band, lateral compressed walls and a flaky ventral sole. The hard keratinised epidermis is formed from the nail matrix that is an extension of the hirsute skin, with an underlying vascular dermis.

Cats can unsheath their claws by muscle action and retract them with an elastic ligament on the dorsal aspect of the middle and distal phalanges.

Depending on the pigmentation of the claw, the dermis may or may not be visible. Care must be taken when clipping claws to avoid laceration of the 'quick' and subsequent haemorrhage.

The claws of the accessory first digits on the medial aspect of the foot of dogs is often termed the dew claw.

The immune system is involved in several diseases of the skin, with different types of hypersensitivity reactions occuring.

As the integument of avians, reptiles and amphibians is markedly different to that of mammals, it is covered on another page.

The Integument of Exotic Species