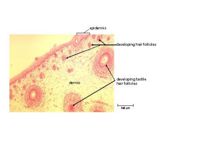 Hair germs begin from an aggregation of keratinocytes in the stratum basale of the epidermis. The initiating factor is the underlying dermal fibroblast cells. The keratinocytes elongate, divide and relocate to the dermis. Dermal fibroblasts then form a dermal papilla beneath the hair germ. This causes stimulation of the basal stem cells to up-regulate their cycle, producing cells that will keratinise and form the hair shaft. Two swellings form on the shaft, one containing stem cells for follicle regeneration, the other becomes a sebaceous gland which will secrete sebum onto the hair shaft. The follicles develop from an ectodermal bud which invades the mesenchyme during embryonic development. The mesoderm also condenses during the development creating an outer mesodermal component to the embedded part of the hair.

Hair follicles grow in repeated cycles in a mosaic pattern so that the whole hair coat isn't lost at one time. Peaks of hair replacement occur in the spring and autumn.

The majority of hair follicles will be in this phase. The hair grows in length.

The dermal papilla is broken away and the follicle shrinks.

The hair doesn't grow but stays attached while the dermal papilla is resting.

After telogen the follicle re-enters anagen and the dermal papilla reattaches to the base of the follicle. If the old hair has not already epilated it will be pushed out by the new growing hair.

Hair growth is controlled by a number of factors including: photoperiod, ambient temperature, health, genetics, nutrition, hormones and local factors that directly influence the growth of hair follicles.

The most important factors controlling moulting are ambient temperature and photoperiod, and this means that animals kept indoors in a near-constant environment may shed all year-round.

All hair has a similar structure: an outer cuticle, a cortex containing pigmentation, an inner medulla and a root or bulb from which the hair grows out of the follicle to form the shaft.

Each hair follicle has a sebaceous gland and an arrector pili muscle associated with it.

The hair follicle originates from a peg of epidermal cells that grows down into the underlying dermis, where it forms a hair cone over a piece of dermis called the dermal papilla. The papilla provides the blood and nerve supply for the growing hair. From the hair cone, the cells keratinise and form a hair. As the hair grows up through the epidermis to the skin's surface, the cells at the point of the cone die, forming a channel, the hair follicle.

The short, fine and densely packed guard hairs of a rex rabbit giving the coat a "velvet" appearance. ©Rachael Wallace2008

These are generally stiff and straight and form the outer haircoat of an animal. They are uniformly distributed across the skin surface and give the haircoat a smooth appearance. The smoothness of the coat is important in allowing rain to fall from the surface without penetrating deeper to the epidermis and causing loss of body temperature. The oily coating of the haircoat comes from the secretions of the sebaceous glands in the epidermis, associated with the hair follicle. This also contributes to the ‘waterproofing’ of the haircoat. Each hair consists of an outer cuticle, with a cortex and innermost medulla. It is composed of highly keratinised, dead epithelial cells, with the arrangement into the 3 layers conferring flexibility. 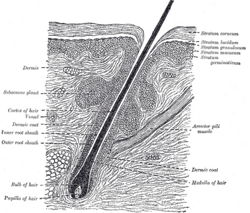 Section of skin showing a hair follicle. From Gray's Anatomy

The arrector pili muscle is attached to the proximal end of the follicle and the dermis close to the point at which the hair is externalised. Involuntary contraction of this muscle in cold ambient temperatures causes erection of the hairs to trap warm air against the skin, thus providing insulation. This can also be induced by the ‘fight or flight’ mechanism of the sympathetic nervous system.

These are thin, wavy, soft hairs that form the undercoat of animals. They are often much more numerous than the tough guard hairs and usually shorter. Their number increases in winter when they serve to keep the body warm. The thickness of the undercoat varies between species. Huskies have a very thick coat whereas Dobermans have almost no undercoat and cannot withstand cold weather very well. Wool hairs often share a single follicle with guard hairs, although this is not common to all species. 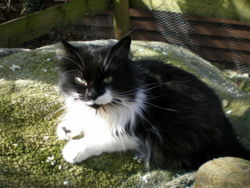 Tactile hairs are associated with a sensory function and are much thicker and stiffer than other hairs. They are mainly found on the face and can also be referred to as whiskers or vibrissae. Their follicles are much deeper into the hypodermis than guard or wool hairs and possess a venous sinus and nerve endings with mechanoreceptors. During embryonic development, they appear before other hair types. These hairs are mostly found on the face, near the eyes and on the upper lip. However they are also found in other areas, for example in a cluster on the carpus in cats, in a tuft on a dogs' cheeks.

These large hair follicles are rapidly adapting mechanoreceptors. They may be present anywhere on the body. These structures consist of a single large hair, surrounded by neurovascular tissue at the level of the sebaceous gland.