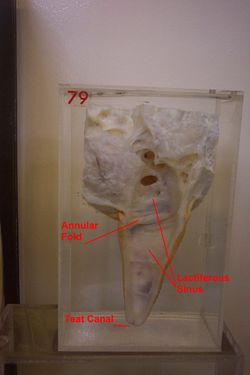 Dissection of a Teat of the Bovine Udder,Courtesy of Andrew Crook, Copyright RVC 2008

Suspensory apparatus of the udder

The mammary gland is a modified sweat gland that nourishes the young. It consists of the mamma and the teat. Undeveloped in both the male and female at birth, the female mammary gland begins to develop as a secondary sex characteristic at puberty. With the birth of the first young, and first lactation, the mammary gland attains its full size and function. When suckling by the young stops, milk production ceases and the gland regresses. Shortly before the next and subsequent parturitions, the gland is stimulated by hormonal changes to produce milk.

An ectodermal thickening developes along the ventral body wall extending from the thoracic to inguinal region - this is the mammary ridge. Cells aggregate, multiply and differentiate to form a chain of condensed mammary buds. Most mammary buds regress but those that remain each develops into a mammary gland. A mammary gland is the secretory and duct system associated with one teat. Mammary buds grow into overlying mesenchyme, and primary epidermal sprouts grow out of the bud apex. The epidermal sprout branches extensively and develops a complete duct system. Mammary adipose tissue is derived from mesoderm. This is required for complete mammary development and is absent in the male. As a result, mammary development in the male is halted at the epidermal sprout stage.

The mamma (pleural = mammae) is the glandular structure associated with a papilla (teat) and may contain one or more duct systems. The udder is a term designating all the mammae in the ruminant and the mare (sometimes also used for the sow). The lobes are the internal compartments of the mamma, separated by adipose tissue. The lobes are divided into lobules, consisting of connective tissue containing alveoli, which are clusters of milk secreting cells. The lactiferous ducts are large ducts conveying milk from the alveoli to the lactiferous sinus. The openings of the lactiferous ducts convey milk formed in the alveolus to the gland sinus.

The teat is the projecting part of the mammary gland containing part of the milk sinus. The papillary duct (teat canal) is the canal leading from the teat sinus to the teat opening and may be single or multiple. The ostium (teat opening) is the opening of the papillary duct and the exit point for milk or entrance point for bacteria. The sphincter consists of muscular fibres surrounding the teat opening that prevent milk flow except during suckling or milking.

The main blood supply to the inguinal mammary glands is from the external pudendal artery. This arises indirectly from the external iliac artery via the deep femoral artery. The external pudendal artery passes through the inguinal canal. In species which also have thoracic and abdominal mammary glands (bitch, queen, sow) additional blood supply is derived from the internal thoracic artery and its branches - cranial superficial epigastric arteries as well as from lateral thoracic and intercostal arteries.

In cattle a venous ring is formed between the base of the udder and the abdominal wall. During the first pregnancy, an anastamosis develops between cranial and caudal superficial epigastric veins forming the subcutaneous abdominal vein (milk vein). As a result some drainage from venous ring passes in a cranial direction via this vessel, which then drains deeply through the abdominal wall (milk well) into the internal thoracic vein. Other drainage passes to the external pudendal veins or to perineal veins.

Somatic innervation is via the ventral rami of the spinal nerves. In the cow, the ventral branches of L1 and L2 (iliohypogastric and ilioinguinal) supply the skin of the cranial glands. Mammary branches of the pudendal nerve supply the caudal aspect of the udder. There is sympathetic innervation to the blood vessels and teat sphincter smooth muscle. Mammary glands also have major influence from endocrine hormones.

Lymphatic drainage in the cow

The afferent lymphatic ducts pass dorsocaudally to reach the superficial inguinal (mammary) lymph nodes at the dorsocaudal side of the udder. These are  usually palpable large, kidney-shaped nodes between the caudal side of the udder base and the thigh. The efferent lymphatic ducts pass into the abdomen through the inguinal canal to empty into the deep inguinal node.

Secretory tissue is arranged into lobes, each consisting of many lobules. Each lobule contains groups of alveoli (secretory compound tubuloalveolar cells) surrounded by a network of blood vessels and connective tissue stroma. The alveolar lumen is filled with milk during lactation. Myoepithelial cells lie between alveolar epithelial cells and the basement membrane. These contract under the influence of oxytocin to release milk to the exterior. Lobes and lobules are drained by lactiferous ducts into the gland sinus, which is continuous with the teat sinus. The epithelium lining the lactiferous ducts and the sinus is two-layered cuboidal. A teat canal connects the teat sinus to the exterior. The lining is stratified squamous epithelium. Circular smooth muscle in the wall of the canal forms a sphincter. Between milkings, the narrow lumen of the teat canal is filled with a soft keratin plug to prevent bacteria entering the teat sinus and prevent milk leakage.