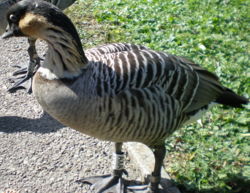 The general make-up of the avian skin is similar to that of mammals, having an epidermis a dermis and a subcutaneous layer. In comparison, however, it is much thinner, effectively glandless and contains feathers. Generally, the skin is thin enough to be transparent, aiding examination of superficial internal organs including the liver. The reduced thickness of the skin is an adaptation to flying, minimising the weight of the bird.

The epidermis consists of 3 layers:

Striated muscles in the epidermis move the skin. The epidermis secretes a thin lipid film that helps to maintain the plumage, mimicking a holocrine sebaceous gland, a feature unique to birds.

The dermis is divided into:

The subcutaneous layer is formed mainly by loose connective tissue. It also contains fat, both as a layer, and in discrete fat bodies. These are readily observed as yellow deposits beneath the skin.

Areas of fat deposition vary from species to species (high in aquatic birds) and the time of year (pre-migration deposition).

Common areas of fat deposition are lateral to the pectoral muscles, in the cloacal region and on the dorsum.

The comb and wattle on the head of birds are a result of thickened, highly vascularised dermis.

Skin of the legs and feet

The avian skin is effectively glandless, lacking sebaceous glands and sweat glands and most of the skin is thin, dry and inelastic. The exceptions are:

The Uropygial gland is also known as the preen gland. It is a bilobed gland located dorsal to the cloaca at the end of the pygostyle at the base of the tail. It opens through a caudally directed nipple.

This holocrine gland is NOT present in all species of bird. It is well developed in some parrots (African Greys) but absent in others (Amazons). It is also present in most finches but only some columbiformes.

The uropygial gland is involved in maintaining feather condition and secretions spread by preening. It serves a waterproofing function. The secretions contain a pro-vitamin D, converted by UV light to active vitamin D. The secretions are also believed to suppress the growth of micro-organisms, serving an anti-bacterial function.

This function is unique to birds and it is suggested that the lipid production by the keratinocytes makes the entire skin an 'oil-producing' gland.

Given that birds do not have sweat or odour producing glands, it is noted that when stressed (e.g. during handling), some parrot species emit a musty odour. This appears to arise from volatile fats emitted directly onto the skin by rapidly lysing keratinocytes. 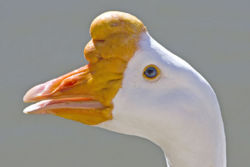 The bill and cere of a domesticated Chinese goose, highly exaggerated by farm selection

Histologically, it is similar to the skin, with a modified epidermis. The stratum corneum is very thick, containing cell bound calcium phosphate and layered crystals of hydroxyapatite.

The beak is very sensitive to heat, cold, pressure and pain due to a high number of mechanoreceptors (Herbst corpuscles) being presence.

The corpuscles are recognisable histologically as papillae, originating from the dermis ending in crater-like structures at the distal tip of the beak.

The cere is situated at the base of the upper beak and is composed of keratinised skin. The colour of the cere is influenced by diet and hormones.

The beak has two holes called nares (nostrils) which connect to the hollow inner beak and thence to the respiratory system. The nares are usually located on the dorsal beak. In some birds, they are located at the base of the beak in the cere.

The skin of reptiles has numerous functions including display, protection, camouflage, thermoregulation and fluid homeostasis. 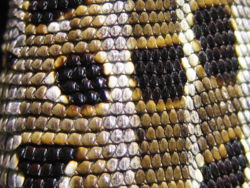 The scaly appearance of the skin of the lizard "Lacerta agilis"

The skin is dry, with few glands compared with mammals and amphibians. Glandular tissue is confined to femoral and precloacal pores in some lizards.

The epidermis consists of 3 layers:

In reptiles, 2 forms of keratin are present:

The dermis of reptiles contains pigment cells, nerves and vessels, although thick, keratinised skin is without cutaneous sensation, leaving captive reptiles at risk of thermal burns. The dermis may contain bony plates called osteoderms for example, in the crocodile, tortoise and skink. The chelonian shell is formed from around 60 osteoderms which are fused with the ribs and parts of the spine and covered with epidermal scutes or leathery skin. 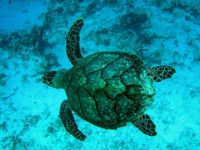 Eretmochelys imbricata. The carapace's serrated margin and overlapping scutes are evident in this individual

As previously mentioned, the shell comprises around 60 osteoderms which are fused with the ribs and part of the spine and covered by epidermal scutes or leathery skin.

The shell consists of a dome-shaped carapace dorsally and a flattened plastron ventrally. The exact size, shape and contour depends on the species. The pattern of the osteoderms and the overlying scutes do not match exactly, giving the shell additional strength. Scutes grow by the addition of new keratin layers to the base of each scute. 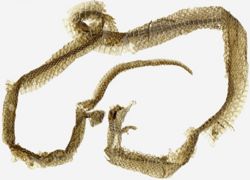 The skin of a snake following ecdysis

Ecdysis is the shedding of the skin in reptiles and is under the influence of the thyroid gland. Snakes and geckos tend to shed the whole skin and geckos also eat the shed skin, whereas other lizards shed piecemeal. Terrestrial tortoises shed legs, tail and neck skin only (piecemeal). Aquatic chelonia also shed individual scutes.

During ecdysis, the skin becomes more permeable and therefore more vulnerable to parasites and infection. Absorption of topical medications may also be enhanced, leading to toxicities. In snakes and some geckos, Stage 2 may most easily be recognised clinically as 'blue-white' discolouration of the spectacle. Snakes may become more aggressive and skittish at this time due to their temporarily impaired vision.

During ecdysis, many reptiles will seek out areas of increased humidity to facilitate proper shedding. Snakes especially may also require a rough object against which to rub to initiate final shedding. Failure to provide adequate humidity and/or a rough object, is a very common cause of dysecdysis in captive reptiles. 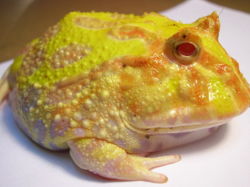 Amphibians are wholly or partly dependent on access to water and their integument is a very important organ. It functions as protection and as a sensory organ as well as having thermoregulatory and fluid homeostatic properties. Amphibian skin is very permeable, and many anurans (frogs and toads) have markedly increased vascularity over an area on the ventral pelvis known as the drinking patch or pelvic patch to enable water absorption (most amphibians don't drink).

The epidermis of amphibians is considerably thinner than that of reptiles and mammals and is easily damaged. The stratum corneum may be only 1 cell thick or may even be absent. Many amphibians shed and eat their skin on a regular basis.

The dermis of amphibians consists of an outer stratum spongiosum and an inner stratum compactum. It contains nerves, vessels, smooth muscles, chromatophores and specialised glands.

In salamanders, the stratum compactum is tightly adhered to the underlying connective tissue.

In anurans (frogs and toads), the stratum compactum is loosly adhered to the underlying connective tissue providing a useful site for subcutaneous injection.

Glands in the epidermis may produce mucous or waxy substances which may serve to enhance cutaneous respiration and reduce evaporative water loss, respectively. Glands may also produce toxins and other chemicals which serve to protect against predators and infection.

Poison arrow frogs (Dendrobatids) are renowned for posessing potent toxins but only 2 or 3 species are known to produce enough toxin to be harmful to humans. Toxins are usually concentrated or metabolised from wild prey items and therefore captive bred and long-term captives produce little or no toxin, however, the importance of careful handling cannot be understressed.

There are broadly 2 groups of fish: marine and freshwater fish. Marine fish have the tendency to gain salt and lose water, whereas freshwater fish tend to lose salt and gain water. The skin is a semi-waterproof barrier which helps maintain fluid and salt balance, in addition to the kidney and gills. 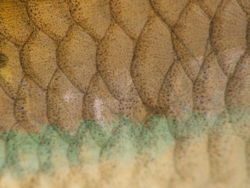 Scales of Bitterling (Rhodeus amarus)from the hindflank. The bluegreen colour of the tailstripe comes from the epidermis, background colour from the dermis. Photograph by Piet Spaans

There are four types of fish scales.

Another, less common, type of scale is the scute, which is:

Some fish, such as pineconefish, are completely or partially covered in scutes.

The epidermis and dermis of fish are similar to other vertebrates.

The epidermis consists of a stratum basale and a stratum germinatum. There is no stratum corneum or stratum spinosum though in some species (e.g. goldfish), accumulations of localised cornified cells occur during the breeding season ('breeding tubercles').

The thickness of the epidermis varies and contains mucus-secreting goblet cells. Some species have club cells which secrete alarm substances.

The cuticle consists of mucus and contains antibodies and lysosymes.

Unlike mammalian epidermal cells, fish epidermal cells at all levels are capable of cell division. During wound healing, cells migrate rapidly to cover any defect and restore the waterproof integrity of the skin. 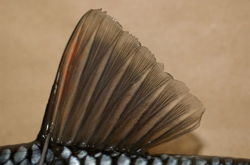 The dermis of fish consists of a stratum spongiosum and a deeper stratum compactum. It also contains chromatophores, mechanoreceptors, chemoreceptors and electroreceptors.

Scales are embedded in the dermis and covered by a layer of the epidermis; thus, the loss of scales will almost always damage the skin leading to osmotic balance problems.