Feathers are one of the epidermal growths that form the distinctive outer covering, or plumage of birds. They are the outstanding characteristic that distinguishes the Class Aves from all other living groups. 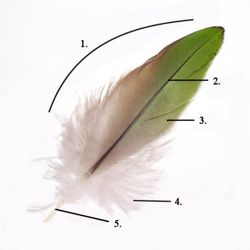 In most birds, the body is divided into areas that contain feather tracts, pterylae and areas that do not, apteriae. The location and the number of tracts varies between species. By originating from tracts rather than being randomly distributed, feathers can smoothly overlap and conform to the natural contours of the body. By laying feathers over apteriae, air can be trapped beneath, providing insulation.

The portions of the feather can be described as follows: 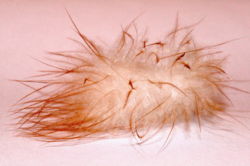 Feathers are characterised and categorised by the structure of the rachis, barbs and barbules. There are 10 types recognised.

Physiology of the Feather 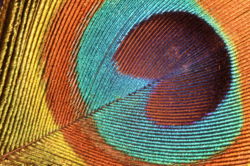 The bright colouring of a peacock tail feather. Photograph by Michael Maggs

Colour pigments that are deposited at the time of feather development. These can be naturally occurring, or synthetically produced. Black, brown and grey colours come from melanin, whereas carotenoids in the diet create red, orange and yellow and porphyrins synthesised by the bird form green, red and some browns.

These structural features of the feather can be inherent in the development of the feather. They can also be induced by materials that are placed on the feathers after development, that alter the absorption or reflection of light.

If a feather reflects all light, it appears white; if it absorbs all wavelengths, it appears black. The capacity of the barbs and barbules to scatter and reflect varying wavelengths of light causes an irridescent glow of the feathers. Blue colours are created by the barbs interacting to reflect blue light, while allowing other wavelengths of light to be absorbed by darker melanin granules. Green colours may be created by pigments, or more commonly, through a combination of blue and yellow pigments.

These are of two basic types:

Mutations are often the two types in combination. However, similar colour changes can also be observed due to disease or malnutrition, especially deficiencies of essential amino acids and vitamins.

Some red colouration in the appendages of birds is caused by vascularisation and not pigment disposition. The combs and wattles on chickens and in some part, the mouth colouring of baby chicks, are examples.

Soft keratin structures undergo constant moult and replacement in a similar fashion to mammalian skin. Feathers moult by the growth of a NEW feather causing the shedding of an old one in a similar way to that of hairs of mammals.

Moulting patterns and periods vary with:

The moult may be:

Ultimate control of the moult involves many factors, the most influencial being nutrition. Feathers can constitute in excess of 10% of the body mass of a bird and renewing this amount of tissue in a relatively short period of time places a high metabolic and nutritional demand on a bird.

Protein, mainly in the form of keratin makes up approximately 90% of the dry matter content of feathers. Structurally, keratins contain a higher level of the sulphur-containing amino acids methionine and cysteine than normal body or egg protein.

There is no indication that (mal)nutrition has any proximal control over the onset of the moult as moult will proceed irrespective of the nutrtional status of the bird.

Inadequate nutrition pre- or peri-moult will result in the bird adjusting its moult by:

The result of these changes is either a protracted moult or poor quality feathers (pigmentation changes, structural defects to the barbs, 'thin' feathers).

Fret marks (stress lines) appear as clear breaks in the feather colour as a result of interruption in feather growth and malformation of the feather barbs. Nutritional, environmental, disease or drug stresses can result in the production of 'fret marks'.