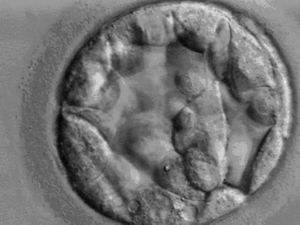 Once sperm has entered the the oocyte, an ootid is formed. During early stages the ootid will contain male and female pronuclei along with the first and second polar bodies. Fusion of the male and female pronuclei will result in a single diploid nucleus or syngamy. Once syngamy has occurred, the zona pellucida then develops into an imprenetrable layer that prevents polyspermy and so polyploidy. Once the zona pellucida has developed, the ootid is now referred to as a zygote (diploid) and will begin undergoing mitotic divisions via a cleavage process that will begin to give rise to daughter cells called blastomeres. These cleavage divisions will begin to produce a 4-celled embryo and then an 8-celled embryo.

All cells in the embryo up to this stage are totipotent and divide asynchronously. After the 8-celled stage, a ball of cells is formed and is referred to as a morula. A morula has tight junctions formed between outer cells and gap junctions between the inner cells enabling them to polarise as a group and effectively create two distinct groups of cells within the morula. The outer cells pump sodium into the intracellular spaces and water follows osmotically allowing fluid to begin to accumulate within the morula.

Cells within the morula continue to divide and a blastocyst (see image) develops, consisting of an inner cell mass or (ICM), a blastocoele cavity and a single layer of trophoblast cells. As fluid accumulates, the outer cells become flattened and a cavity known as the blastocoele is formed. At this stage, two separate cellular components emerge - the inner cell mass and the trophoblast.

Mitosis continues to occur within the blastocyst and fluid accumulates to fill the blastocoele and pressure within the embryo increases. Concurrent with growth and fluid accumulation is the production of proteolytic enzymes by trophoblastic cells which begin to weaken the zona pellucida. The blastocyst then begins to contract and relax causing intermittent pressure pulses on the zona pellucida which eventually ruptures facilitating the development of a small fissure just large enough for the blastocyst to squeeze out.