The peripheral nervous system found in most domestic species can be segregated into three sub-systems; the sensory system, the somatic motor system and the autonomic system. The autonomic nervous system (ANS) regulates the internal environment of the body including factors such as body temperature, blood pressure and concentrations of many substances. The ANS is also responsible for mobilising the body's resources during stressful situations. The ANS controls gland cells, cardiac muscle cells and smooth muscle cells. Control of this nervous system is involuntary and regulation is via autonomic reflexes. The autonomic reflex arc system is very similar to that of the somatic motor system, i.e. there are sensory (afferent) nerve fibres, an information integration centre, motor (efferent) fibres and effector cells. Any levels of increased activity within the autonomic nervous system can result in both stimulation or inhibition of effector cells, although it is only the efferent part of the reflex arc that is actually considered autonomic.

Within the somatic nervous system, the link between the skeletal muscle cell and the central nervous system consists of a single nerve fibre. Within the ANS, efferent signals are transmitted by two neurons between the CNS and the effector cells. The first neuron is a preganglionic neuron with a cell body in the CNS (either brain stem or spinal cord). The second neuron is postganglionic and connects the effector cell with the autonomic ganglia found outside the CNS. The ANS nerve fibres are generally composed of General Visceral Motor (GVM) that transmit purely motor signals and General Visceral Sensory (GVS) which transmits purely sensory information.

The ANS reflex arcs maintain homeostasis via a process of negative feedback in which a sensory cell from within the peripheral nervous system takes a measurement, for example body temperature. This temperature reading is then relayed to the CNS where it is compared to a reference value. The CNS then uses efferent fibres to generate a response from effector cells given the comparison to the reference and thus adjusting the internal environment.

Most organs in the body are under some form of autonomic control and therefore receive nerve fibres from both the SNS and PNS. There are some exceptions to this rule, for example, most blood vessels only receive an SNS supply. In organs where there is dual nerve fibre supply, the two divisions of the ANS almost always have opposing effects. Using the heart as an example, increased activity in the SNS leads to increased cardiac activity such as heart rate whilst stimulation of PNS fibres leads to reduced cardiac activity.

The ANS integrating centres are located in the spinal cord, medulla oblongata and the hypothalamus. The hypothalamus functions as the principle coordinating centre for the ANS and also has the ability to affect other ANS coordination centres within other parts of the CNS. For example, there is a close association between the hypothalamus and the limbic system (emotion centre). There is also considerable connectivity between the hypothalamus and the cerebral cortex. Therefore autonomic functionality is not independent of thoughts or emotions; fear and anger have the ability to activate the SNS whilst anticipation of food stimulates the PNS resulting in increased salivation and intestinal peristalsis. It should be noted that although the ANS and higher processes such as the cerebral cortex are connected, the connection is indirect. Sensory cells within the ANS do not convey information directly to the cerebral cortex and therefore the animal is not normally aware of the impact that their thoughts and emotions are having on their organs. 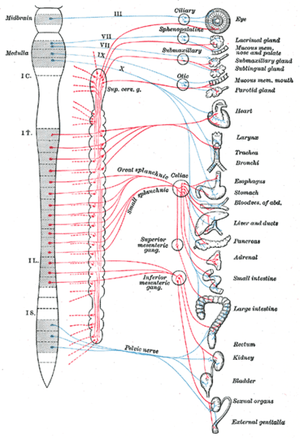 The SNS is activated in stressful or physically demanding situations and can temporarily enhance the physical performance of the body in order to better cope with the stressor; it is often referred to as the "fight or flight" system. The sympathetic division of the ANS has a thoracolumbar outflow from the CNS. The preganglionic neurons (see Basics section) of the SNS are found within the grey matter of the lateral horns of the spinal cord within the full length of the thoracic vertebrae and the cranial lumbar vertebrae. Preganglionic neurones in the SNS are relatively short. The number of vertebral segments containing SNS preganglionic neurones has wide variation depending on the species in question; horses have 18 thoracic segments, canines have 13 and humans have 12. In most domestic species, the cranial most 4 to 6 lumbar vertebrae contain SNS segments. These preganglionic segments are located like a string of beads along either side of the spinal cord and are referred to as sympathetic chain ganglia. In most cases the number of sympathetic ganglia exceeds the number of spinal cord vertebrae containing the preganglionic cell bodies. SNS axones exit the spinal cord via the ventral root allowing the formation of the sympathetic trunk via processes called white rami communicantes which are heavily myelinated. On entry to the sympathetic trunk, there are three possibilities for the neuron.

These preganglionic fibres then branch out to form synapses with postganglionic neurons, but in doing this each preganglionic fibre actually interconnects between neighbouring sympathetic chain ganglia. Therefore presynaptic nerve fibres from one segment of the spinal cord terminate in several ganglia and therefore activity in individual ganglia may affect many areas of the body. Postsganglionic neurones then extend to target organs spread throughout the body. The exception to this rule is the adrenal medulla as this endocrine gland receives sympathetic input directly from preganglionic nerve fibres, directly from the spinal cord. In this case, the adrenal glands are effectively modified post-ganglionic sympathetic neurons that do not have axons. 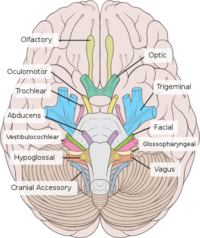 The PNS is only activated during rest and can be used to regulate systems during functions such as digestion. Preganglionic parasympathetic neurons have cell bodies that are located in two separate parts of the CNS, rather than running almost the full length of the CNS as the SNS does. The PNS has preganglionic neurons located in the brain stem and the sacral part of the spinal cord, and is referred to as a craniosacral outflow. Four of the cranial nerves supply parasympathetic innervation to the majority of the body's glands and internal organs; the oculomotor nerve (III), facial nerve (VII), glossopharyngeal nerve (IX) and the vagus nerve (X). In particular the vagus nerve (tenth cranial nerve) is responsible for a major proportion of PNS innervation, although the PNS fibres located within the lateral horns of 2 or 3 sacral segments are responsible for innervation of the sex organs, urinary bladder and the rectum. Preganglionic PNS neurones are relatively long and have their cell bodies located within the cranial nerve nuclei for cranial nerves or in the lateral horn grey matter of the spinal cord for the sacral segments. PNS ganglia are located either adjacent to or within the wall of target organs and in contrast to SNS ganglia, there are no interconnections between ganglia in the PNS. Postganglionic PNS neurones are therefore very short.

Postganglionic parasympathetic neurons that lead to the digestive tract differ from other organ connections with the PNS as within the GI tract they become part of a plexus of neurons within the walls of the tract. This complex network of neurons is referred to as the enteric nervous system (ENS). The ENS includes sensory and motor components and is therefore of vital importance in regulating smooth muscle within the GI tract. The wall of the GI tract contains numerous sensory cells that are able to react to different stimuli including; wall stretch, changes in nutrient concentrations, osmolarity, pH and irritation of the mucosal membrane. Stimulation of these sensory cells initiates reflexes which coordinate various elements of the GI tract such as smooth muscle activity, exocrine cells and endocrine (hormone producing) cells.

Therefore the ENS provides the gastrointestinal (GI) tract with a certain degree of self-regulation, although most of these short reflex arcs provide a stimulatory influence, utilising acetylcholine. Some inhibitory reflexes do exist within the ENS including sphincter relaxation.

Within the PNS, activity in the GI tract is also regulated via longer reflex arcs that are made up of preganglionic and postganglionic parasympathetic fibres from the CNS. The majority of the sensory cells within these long reflex arcs have sensory nerve endings within the digestive tract, although other senses including sight and smell can also exert an effect on the activity of the GI tract. Within the long reflex arcs, most postganglionic fibres are actually part of the GI tract internal nerve plexuses and the preganglionic nerves mainly run in the vagal nerve. Most postganglionic parasympathetic neurons release acetylcholine from their nerve endings, stimulating both secretion and motility. As mentioned within the SNS section above, long reflex arcs associated with the SNS system generally inhibit secretion, motility and decrease blood supply to the digestive tract.

These long reflex arcs primarily act to coordinate and regulate the activity of different sections of the GI tract. The PNS long reflex arcs are mainly involved in preparing sections for activity as they are mainly stimulatory. An example of this would be that the mastication of food stimulates salivary secretion but also secretion of gastric juice, pancreatic juice and bile.

A section regarding the type of neurotransmitter and its effect from both the SNS and PNS has been included to display the most common types of receptors and their function for the major body systems. The table below is not exhaustive but highlights the main neurotransmitters.

The β1 adrenergic receptor is G protein-coupled and is associated with a number of physiological effects including increased viscous salivary secretions, increased heart rate and increased heart contractility. β1 receptors result in the upregulation of cAMP resulting in stimulatory effects. The β2 receptor is also an adrenergic receptor that is G protein-coupled. β2 receptors have a wide range of effects (see table below).