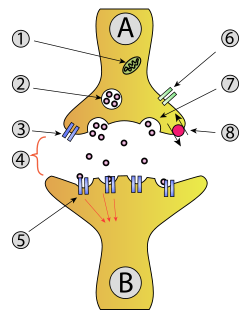 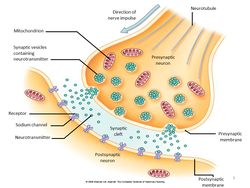 Neurotransmitters are chemicals that are used to relay, amplify and modulate signals between neurones and cells. They can be classified into two main groups; small-molecule transmitters (SMT) and neuropeptides.

SMTs are synthesised within nerve terminals via enzymes that are produced within the cell body. Within most nerve junctions, the terminal membrane of the nerve contains numerous specific transport proteins that facilitate the transport of the majority of the SMTs back into the nerve terminal, effectively recycling the neurotransmitter.

Neuropeptides are constructed of around 3 - 40 amino acid molecules that are synthesised within the cell body and are then transported to along the axon to the nerve terminal within vesicles running along microtubules. Neuropeptides are broken down by extracellular enzymes called peptidases once the neurotransmitter has been released. A small proportion of neuropeptides can bind to postsynaptic receptors in the nerve terminal membrane and can be taken up by endocytosis, although the degree of recycling of neuropeptides is lower than that of SMTs.

When glutamate is released it facilitates the opening of sodium channels within the post-synaptic membrane allowing sodium ions to enter the membrane and causing depolarisation. Therefore glutamate makes it easier for the cell to reach its depolarisation threshold and generate an action potential. Due to this, Glutamate is classified as an excitatory neurotransmitter.

Glycine is present in the spinal cord and is crucial for limb movement; in particular the motor function associated with limb reflexes. When both glycine and GABA are released they result in the opening of chloride ion channels within the post synaptic membrane resulting in the membrane becoming hyperpolarised. The cytosolic side of the membrane becomes more negative. Therefore both neurotransmitters make it more difficult for the cell to reach its depolarisation threshold to generate an action potential, thus classed as inhibitory.

Biogenic amines are synthesised from only several types of amino acids. Which amino acids are used in their formation depends on their classification.

Epinephrine is produced by the adrenal glands. It is primarily involved in an overall activation of the sympathetic nervous system and is involved in the management of stress. Norepinephrine is also produced by adrenal glands and is involved in the initiation and maintainance of consciousness within the sympathetic nervous system. Both types of neurotransmitter utilise α or β receptors and are metabotropic.

Dopamine is involved in motivation as well as love and addiction. It is effectively a 'reward system' for the brain. Dopamine also affects the way in which the basal ganglia of the brain affect our movements and a shortage of dopamine can result in diseases such as Parkinson's. Dopamine is the primary neuroendocrine regulator of prolactin from the anterior pituitary gland. It is thus often called prolactin-inhibiting hormone in reproduction. Dopamine produced by the hypothalamus is secreted via the hypothalamo-hypophysal blood vessels which supply the pituitary gland. Secretion of prolactin via lactotrope cells within the pituitary is inhibited by dopamine.

Serotonin is involved in emotions, mood, sexuality, consciousness, sleep and thermoregulation. Serotonin is utilised by the central nervous system and the gastro-intestinal system. Serotonin has also been linked to mechanisms controlling pulmonary and cerebral vascular vasoconstriction.

Melatonin is responsible for the regulation of onset of sleep and also for seasonal changes in the body such as winter weight gain and mating seasons.

Other common SMTs include acetylcholine, ATP and nitric oxide.

Acetylcholine (ACh) is the most common excitatory neurotransmitter in the peripheral nervous system. Cholinergic neurons release ACh and for example, are found in the neuromuscular junction. When ACh is released, it facilitates the opening of sodium channels within the post-synaptic membrane allowing sodium ions to enter the membrane and causing depolarisation. Therefore ACh makes it easier for the cell to reach its depolarisation threshold and generate an action potential. ACh has an effect on the post-synaptic membrane in skeletal muscle via nicotinic receptors, which are ionotropic (see below). ACh also exerts an effect on smooth muscle via the parasympathetic nervous system via muscarinic receptors, which are metabotropic (see below).

Adenosine triphosphate (ATP), as well as having many important intracellular functions, is an important neurotransmitter and also has an autocrine and paracrine function. ATP belongs to the purines SMT group. All synaptic vesicles released by the terminal membrane of a nerve contain ATP as well as other neurotransmitters, although ATP can only function as a neurotransmitter in its own right if the post-synaptic terminal membrane contains ATP receptors. These ATP receptors are referred to as purinergic receptors. A pre-synaptic nerve terminal or terminal membrane never releases multiple types of SMT in addition to ATP, although it is common that neuropeptides are released in addition to ATP and SMTs. Other SMTs within the purine group include Guanosine triphosphate (GTP) and their derivatives.

Although nitric oxide (NO) is a neurotransmitter, its characteristics differ from those discussed above. NO relies on calcium ion activation of the enzyme nitric oxide synthase (NOS) which is found throughout the nervous system and is the enzyme that is responsible for catalysing NO from the amino acid L-arginine. NO has a very short half-life and is highly reactive. It is able to pass easily through lipid membranes. What makes NO differ from the SMTs above is that is can be released in all directions rather than pre-synaptically as per the classical SMTs. Therefore NO is able to act as a signalling pathway for the post-synaptic neuron to affect the pre-synpatic neuron. Nitrous oxide is involved in enlargement of the genital organs leading to erection.

The neuropeptide group of neurotransmitters contain a wide range of molecules of which only the major transmitters are included below. These include; enkephalin, subtance P, LHRH, vasopressin, cholecystokinin/CKK, vasoactive intesinal peptide (VIP), endorphin, neurotensin, TRH, angiotensin-II, somatostatin and oxytocin. These neuropeptides have a wide range of effects throughout the nervous system. Many of these neuropeptides are released from nerve terminals but also as hormones from endocrine cells, cholecystokinin is an example.

Vasoactive intestinal peptide (VIP) plays a role within the intestines and acts to greatly increase the secretion of water and electrolytes. VIP also causes dilation of the smooth muscle within the peripheral smooth muscles and inhibits gastrin-stimulated gastric acid secretion. The overall effect of VIP is to increase gastric motility.

The neuropeptide vasopressin is responsible for metabolism and maintainance of the metabolic rate.

Substance P is involved in the transmission of pain from peripheral receptors to the central nervous system. It acts to increase the sensation, and therefore the consciousness, of pain and is released when nociceptors are activated. Enkaphalin acts to inhibit the release of substance P therefore acting to diminish the sensation of pain.

Endorphins and enkephalins are both examples of opioids and act within neuronal synapses to reduce the sensation of pain acting as natural pain killers. In humans, it has been shown that these neuropeptides also lead to a sense of euphoria. Both of these molecules belong to the same opioid category as morphine and heroin. They are produced by the pituitary gland and the hypothalamus and they chemically resemble opiates in their ability to produce analgesia and a sense of well-being. Endorphin has also been shown to stimulate dopaminergic neurones. In addition to this, endorphin can act to inhibit the release of substance P and therefore decrease the conscious perception of pain.

Cholecystokinin or CKK is secreted as a hormone and is involved in gastric enzyme secretion. CKK affects the secretion of pancreatic enzymes but also promotes feelings of satiety within the cortex of the brain following a meal. It is also involved in smooth muscle contraction within the small intestine.

Somatostatin or growth hormone-inhibiting hormone (GHIH) is a regulatory molecule within the endocrine system but also affects neurotransmission via it's interaction with G-protein coupled somatostatin receptors. It also inhibits the production of many other secondary hormones.

Other Types of Neurotransmitter