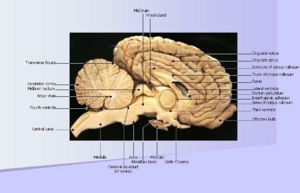 The physiology of the nervous system can be explored at the level of a nerve cell, or 'neuron'. Communication between these cells uses electrical or chemical signals known as neurotransmitters; the cellular response generated in response to this signalling is known as an action potential.

The central nervous system is comprised of the brain and spinal cord. The brain is contained within the skull, and the spinal cord is contained within the spinal vertebral canal. The brain is covered and protected by the meninges. The meninges are comprised of three layers: the dura mater (the outermost layer), the arachnoid mater (the middle layer), and the pia mater (the innermost layer). Cerebral Spinal Fluid (CSF) is the fluid surrounding the brain as well as the central canal of the spinal cord which helps cushion the CNS, acts as a chemical buffer, provides immunological protection and transports waste products and nutrients. Nerves arising from the brain and brain stem are the cranial nerves whilst those arising from the spinal cord are the peripheral nerves.

In physiological terms, when processing information the CNS and PNS are integrated into pathways; examples would include motor pathways and sensory pathways. Motor pathways carry signals from the cerebellum to the skeletal muscles using upper and lower motor neurons connected via the pyramidal system or the extrapyramidal system. Sensory pathways carry sensory information detected by peripheral nerves in an ascending path through the spinal cord to the higher levels of the brain. Types of general somatic sensation include pain, touch, temperature and kinaesthesia (conscious proprioception).

In anatomy, there are four major senses which have specialised organs assocated with them. They are the eye, the ear, the nose and the tongue. These organs process visual, auditory, olfactory and taste sensations respectively.