The ear is a paired sensory organ, that is involved in both hearing and balance. For this reason, the ear is known as the vestibulocochlear organ. 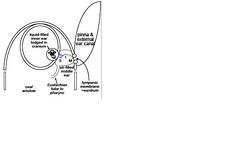 Anatomically, the ear can be looked at in three parts:

1. Outer ear - pinna and auditory canal down to the level of the tympanic membrane

2. Middle ear - contains the malleus, incus and stapes bones - known as the ossicles

3. Inner ear - contains the membranous and bony labyrinths, and the cochlea 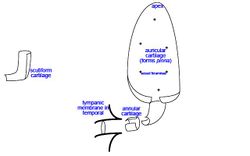 The pinna consists of the auricular cartilage, and skin which allows for flexibility and elasticity. The auricular cartilage is flared distally into a flattened cone shape, covered by skin on both sides - more tightly on the medial or concave side than the convex side. The hair covering on the convex side is usually similar to the rest of the body but the hair covering on the concave or medial aspect is variable. There are also irregularities on the concave surface with ridges and prominences, the medial and lateral crus of the helix on the medial aspect of the opening of the external ear canal, opposite the rectangular tragus on the lateral aspect.

The cartilage and bony process of the external ear and the tympanic membrane are covered by skin. The skin of the normal ear has a thin stratified keratinising epidermis and a thin dermis containing adnexal structures – hair follicles, sebaceous and apocrine glands. The density of hair follicles on the concave pinna is variable, as is the density and distribution of hair follicles in the ear canal itself. Some species are devoid of hair in the lower (proximal) ear canal (eg horse); hair follicle density in the dog is variable – usually simple but in some breeds compound hair follicles.

Foreign bodies can become lodged in the external auditory meatus, but glands are present that produce wax which can trap these.

Muscles around the base of the ear that are attached to the skull allow movement of the pinna, so the ear can be directed to the source of sound: 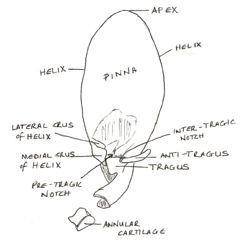 The auricular cartilages of the left canine ear. Image by Rachael Wallace

Microclimate of the Ear Canal

The microclimate of the external ear canal remains surprisingly stable in spite of marked changes in the ambient temperature and humidity of the surrounding environment. The temperature in the healthy ear canal is between 38.2 and 38.4 C, and 0.6 C below rectal temperature. The mean relative humidity in the ear canal is 80.4%, with mean pH of 6.1-6.2.

Otitis externa is associated with an increase in temperature, relative humidity and a rise in pH within the external ear canal. The nature of the secretions alters, with a decrease in the lipid content of cerumen.

Glands of the Ear Canal

The apocrine glands in the ear canal are modified and known as ceruminous glands. The material secreted into the ear canal, cerumen (or wax), is compromised of exfoliated epithelial cells (squames) and glandular secretions. Sebaceous glands predominate distally and are largely responsible for the lipid component of cerumen. The density of ceruminous glands increases proximally, towards the tympanic membrane. The secretions of the ceruminous glands contain mucopolysaccharides and phospholipids. Immunoglobulins IgA, IgG and IgM have been identified in canine cerumen, predominantly IgG.

In the tissues medial to the ear canal lie the auricular and superficial temporal arteries. Laterally is the parotid salivary gland and also a branch of the facial nerve, external maxillary vein and branches of the external carotid artery. The facial nerve exits the skull through the stylomastoid foramen behind the osseous bulla; it passes below the rostroventral aspect of the horizontal ear canal. The auriculo-temporal branch of the mandibular portion of the trigeminal nerve (CN V) and branches of the facial nerve pass rostral to the vertical ear canal.

This epithelial structure separates the external from the middle ear. Below the stratified keratinising outer epithelium is a connective tissue lamina propria, with a cuboidal mucosal epithelium on the inner surface. The tympanic membrane is divided into the pars flaccid dorsorostrally, which lies next to the manubrium of the malleus, and the pars tensa ventrally. The C-shaped manubrium inserts into the lamina propria, extending towards the middle of the pars tensa. Foreign bodies and other damage (severe otitis externa, ascending pathology from middle ear) can result in rupture of the tympanic membrane in the pars tensa region. Defects of the tympanic membrane heal by epithelial migration bridging over the defect, then development of a granulation bed below.

- Dorsal: or epitympanum, conatining 2 of the auditory ossicles – the malleus and incus

- Middle: or mesotympanum bounded by the tympanic membrane laterally and containing the third auditory ossicle, stapes, attached to the oval window. It opens rostrally into the nasopharynx via the eustachian tube

- Ventral: or hypotympanum, or fundic cavity, which is the largest compartment. It is housed by the tympanic bulla which is a thin-walled, bulbous expansion of the temporal bone. 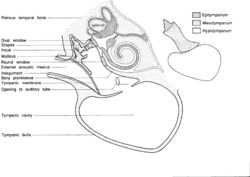 The auditory ossicles are supported by ligaments and muscles, which alter their position and influences the tension of the tympanic membrane. The ratio of the malleus:incus in dogs and cats is 2-3 times that of man, and may explain the increased acuity of hearing. Opposite the lateral tympanic membrane on the medial aspect of the cavity is a bony promontory. Associated structures close to or in channels in the wall of the tympanic cavity (bulla) are the facial nerve, vagus nerve and branches of the carotid and lingual arteries. Post-ganglionic fibres of the cervical sympathetic trunk run in the region of the dorsomedial wall of the tympanic cavity.

The feline middle ear has an incomplete bony septum dividing the ventral chamber into a large ventromedial and small dorsolateral chamber, communicating caudomedially.

The middle ear is lined by cuboidal to columnar mucosal epithelium with scattered goblet cells. The auditory tube is lined by pseudostratified, ciliated columnar epithelium with scattered goblet cells. The goblet cells are more prominent at the tympanic cavity end, contributing to the surfactant nature of the secretions- containing lecithin, lipids and mucopolysaccharides - that decreases surface tension and keeps the tube patent. The density of cilia increases as the tube runs dorsolaterally to open into the nasopharynx behind the soft palate, facilitating movement and drainage of mucus and other material. 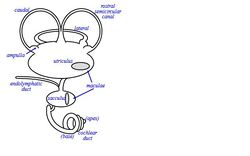 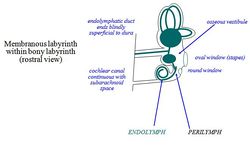 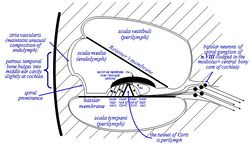 - Ductus reuniens: this is the duct through which the above two labyrinths communicate

- Vestibule: a chamber in the centre of the bony labyrinth, which communicates with both the cochlea and the semicircular canals. The oval and the round windows are both located in the lateral wall of the vestibule.

- Semicircular canals: contain the semicircular ducts, which have arisen from the utricle of the vestibular labyrinth. There are three semicircular canals, corresponding to the three dimensions in which you can move, so they are almost at right angles with each other. Each duct has two crura (leg-like parts). One crus of each duct has an ampulla, which is an expansion of the duct. Movement of endolymph stimulates receptor cells within the ampullae.

- Cochlea: forms a spiral around a central hollow core of bone, called the modiolus,which contains the cochlear nerve. The spiral lamina projects into the spiral canal, partially bisecting the lumen into two parts, which are called the scala tympani and the scala vestibuli. The scala media (the cochlear duct) is inbetween these two parts.

The main function of the ear is to recieve auditory and vestibular input. It locates the directional source of sound, collects sound waves and conducts them to the special organ of sense in the inner ear, where sound is converted to electrical impulses and transmitted to the brain.

The external ear receives sounds, which cause vibrations of the tympanic membrane. These vibrations move along the ossicles of the middle ear, to be transmitted to the inner ear. The stapes is connected to the oval window, so when the stapes transmits vibrations, this causes movement of perilymph that is in the inner ear. The movement of the perilymph is transmitted via the scala vestibuli and the scala tympani, to the round window, where it induces movement of the secondary tympanic membrane. This results in the movement of the endolymph of the cochlear duct, causing pressure on the tectorial membrane, which then induces pressure on the sensory hairs, stimulating the receptor cells within the cochlear duct to send impulses to the spiral ganglion. The axons of the spiral ganglion form part of the vestibulocochlear nerve.

The Outer and Middle Ear

This shows that if the cilia is pushed in one direction, it will be excited, but if pushed in the other direction it will be inhibited.

- high frequencies are dampened out first in the basal, thinner/narrower/stiffer part

2. Lateral Inhibition: allows discrimination of two similar frequencies. It is an active process affected by olivocochlear efferents. It occurs by driving contractions of the outer hair cells which vibrate the membrane.

3. Phase Locking: allows extremely fine discrimination of pitch within the musical range. The action potential occurs at a particular point in the sound wave. The brain can determine frequency information from this.

2. Change in phase difference when head is moved 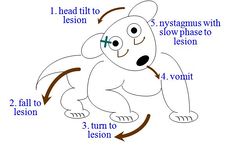 1. Head tilt towards the lesion

2. Fall towards the lesion

3. Turn towards the lesion

4. Vomiting - due to the connection to the vomiting centre of the brain

5. Nystagmus with slow phase to lesion - nystagmus is rapid, involuntary, oscillatory motion of the eyeball in any direction, and can be caused by a lack of coordination

Sensory innervation to the outer ear:

Sensory innervation to the inner parts of the ear is provided by the vestibulocochlear nerve (CN VIII).

Innervation to the muscles of the middle ear: 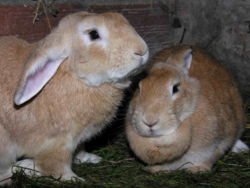 Two rabbits: one with wild-type erect pinnae, the other with pendulous pinnae for comparison